Harun Farocki (1944-2014) was born in Neutitschein, in German-annexed Czechoslovakia. Since graduating from Berlin's Deutsche Film-und Fernsehakademie in 1966, he has directed more that 90 films that include feature films, documentaries and television programs. He has also collaborated with numerous filmmakers as scriptwriter, actor and producer. His films have been the subject of retrospectives at the Museu d'Art Contemporani de Barcelona in 2004, and the Vienna Filmmuseum in 2006. He has participated in important international events such as the 2005 Carnegie International and Documenta XII (2007). He has held many teaching posts and between 1993 and 1999 taught at the University of California Berkeley. Since 2004 he has been Visiting professor at Vienna's Akademie für Bildende Künste. Harun Farocki was a media theorist and writer and was the editor of the influential German film journal Filmkritik from 1974 to 1984. 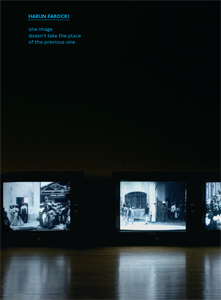