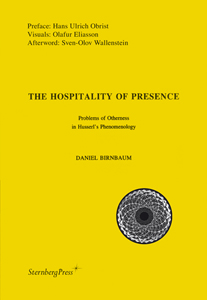 order
wishlist
A study of the concept of otherness in Edmund Husserl's phenomenology (with a special project by Olafur Eliasson).
Daniel Birnbaum's The Hospitality of Presence is a study of the concept of otherness in Edmund Husserl's phenomenology. In the late 1990s it gained international attention in academic circles. It was reviewed favorably in specialized philosophy journals such as Review of Metaphysics and quoted extensively, most notably by Paul Ricoeur in one of the legendary French thinker's last books. It has long been out of print.
Birnbaum's study explores Husserl's theory of temporality and his conception of the Other. The reason for examining these two issues together is that they appear to be closely related and that they illuminate not only each other but also phenomenology's understanding of what it is to be a subject. In opposition to the commonly held view that the idea of a “decentered” and open subject has developed subsequently to and partly as a critique of Husserl's position, this study endeavors to show that his notion of subjectivity is based on a highly sophisticated notion of alterity. The book provides a theoretical framework to Birnbaum's more aphoristic essay Chronology (2005, new edition 2007).
Daniel Birnbaum who has written extensively about contemporary art from a theoretical perspective has, since more than a decade, a close working relationship with Danish artist Olafur Eliasson who has produced a special project for this new edition. The book also contains a preface by Hans Ulrich Obrist, a “speculative note” on the limits of phenomenology by philosopher Sven-Olov Wallenstein and a new introduction by the author.
Curator, art critic and philosopher, director of the Städelschule in Frankfurt am Main and director of its Portikus Gallery until 2010, currently director of the Moderna Museet in Stockholm, Daniel Birnbaum is is also a member of the board of the Institut für Sozialforschung. A contributing editor of Artforum, he is the author of numerous texts on art and philosophy.
order wishlist
Preface by Hans Ulrich Obrist.
Postface by Sven-Olov Wallenstein.
With a special project by Olafur Eliasson.
published in 2008
English edition
16,5 x 24 cm (softcover)
278 pages (19 b/w ill.)
19.00 €
ISBN : 978-1-933128-28-3
EAN : 9781933128283
in stock