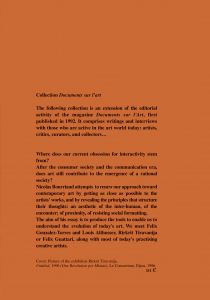 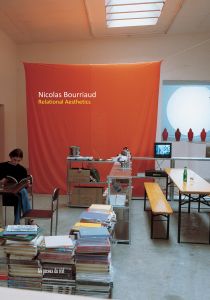 wishlist
Art as a set of practices which take as their theoretical and practical point of departure the whole of human relations and their social context: the manifesto that has renewed the approach of contemporary art since the 1990s.
Where does our current obsession for interactivity stem from? After the consumer society and the communication era, does art still contribute to the emergence of a rational society?
Nicolas Bourriaud attempts to renew our approach towards contemporary art by getting as close as possible to the artists' works, and by revealing the principles that structure their thoughts: an aesthetic of the inter-human, of the encounter; of proximity, of resisting social formatting.
The aim of his essay is to produce the tools to enable us to understand the evolution of today's art. We meet Felix Gonzalez-Torres, Louis Althusser, Rirkrit Tiravanija or Félix Guattari, along with most of today's practising creative personalities.
Nicolas Bourriaud (born 1965) is a French curator, theoritian and writer. He was the founder and director of Montpellier Contemporain (MoCo), gathering the La Panacée art centre, the École Supérieure des Beaux-Arts and Hôtel des Collections. He was the director of the École Nationale Supérieure des Beaux-Arts de Paris from 2011 to 2015. He was Gulbenkian Curator for Contemporary Art at Tate Britain in London from 2007 to 2010 and founder advisor for the Victor Pinchuk Foundation in Kyiv. He also founded and co-directed the Palais de Tokyo, Paris, between 1999 and 2006, and founded the curatorial cooperative Radicants in 2022. He is the author of the landmark publication Relational Aesthetics, published in 1998, and still inspirational today for many artists, curators, and art professionals worldwide.
Bourriaud's curated exhibitions include The 7th continent, Istanbul Biennial (2019), Crash Test. The Molecular Turn, La Panacée (2018); Back to Mulholland Drive, La Panacée (2017); Wirikuta, MECA Aguascalientes, Mexico (2016); The Great Acceleration, Art in the Anthropocene, Taipei Biennial (2014); The Angel of History, Palais des Beaux-Arts, Paris (2013); Monodrome, Athens Biennial (2011) and Altermodern, Tate Triennial, London (2009), among others. Nicolas Bourriaud was also in the curatorial team of the first and second Moscow Biennials in 2005 and 2007.
wishlist
published in 2002
English edition
15 x 21 cm (softcover)
128 pages
ISBN : 978-2-84066-060-6
EAN : 9782840660606
digital version available
sold out