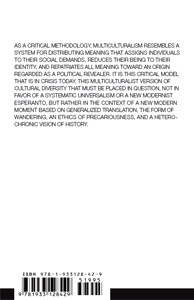 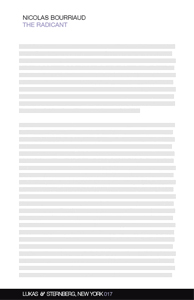 order
wishlist
As a critical methodology, multiculturalism resembles a system for distributing meaning that assigns individuals to their social demands, reduces their being to their identity, and repatriates all meaning toward an origin regarded as a political revealer. It is this critical model that is in crisis today, this multiculturalist version of cultural diversity that must be placed in question, not in favor of a systematic universalism or a new modernist Esperanto, but rather in the context of a new modern moment based on generalized translation, the form of wandering, an ethics of precariousness, and a heterochronic vision of history
Nicolas Bourriaud (born 1965) is a French curator, theoritian and writer. He was the founder and director of Montpellier Contemporain (MoCo), gathering the La Panacée art centre, the École Supérieure des Beaux-Arts and Hôtel des Collections. He was the director of the École Nationale Supérieure des Beaux-Arts de Paris from 2011 to 2015. He was Gulbenkian Curator for Contemporary Art at Tate Britain in London from 2007 to 2010 and founder advisor for the Victor Pinchuk Foundation in Kyiv. He also founded and co-directed the Palais de Tokyo, Paris, between 1999 and 2006, and founded the curatorial cooperative Radicants in 2022. He is the author of the landmark publication Relational Aesthetics, published in 1998, and still inspirational today for many artists, curators, and art professionals worldwide.
Bourriaud's curated exhibitions include The 7th continent, Istanbul Biennial (2019), Crash Test. The Molecular Turn, La Panacée (2018); Back to Mulholland Drive, La Panacée (2017); Wirikuta, MECA Aguascalientes, Mexico (2016); The Great Acceleration, Art in the Anthropocene, Taipei Biennial (2014); The Angel of History, Palais des Beaux-Arts, Paris (2013); Monodrome, Athens Biennial (2011) and Altermodern, Tate Triennial, London (2009), among others. Nicolas Bourriaud was also in the curatorial team of the first and second Moscow Biennials in 2005 and 2007.
order wishlist
Translated from the French by James Gussen and Lili Porten.
published in 2009
English edition
11 x 17 cm (softcover)
220 pages
15.00 €
ISBN : 978-1-933128-42-9
EAN : 9781933128429
in stock
table of contents 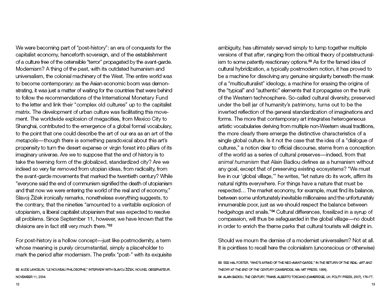