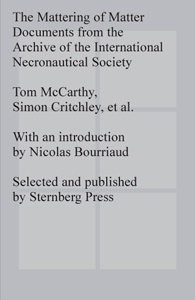 order
A collection of documents of Tom McCarthy's “semi-fictitious organisation” International Necronautical Society, cofounded with Simon Critchley.
On August 7, 1999, Tom McCarthy founded the International Necronautical Society (INS) with a public presentation of the “Founding Manifesto,” a touchstone that would inform the organization's proceedings for years to come. Composed of official committee members and illicit “agents,” the INS harks back to early twentieth-century avant-gardes, producing declarations, reports, public hearings, broadcasts, and research documents, as well as orchestrating more covert media infiltrations, all governed by the objective, set out in the “Founding Manifesto,” of mapping, entering, and occupying the space of death through literature, philosophy, culture, and technology.
The Mattering of Matter is a collection of INS documents produced between 1999 and 2010. This edited selection of texts reflects the INS's development, through both internal bureaucratic changes and its ever-growing repertoire of references, all of which work towards their ultimate goal of constructing a necronautical “craft” with which to propound and escalate the overall INS project.
Tom McCarthy (born 1969 in London, where he lives and works) is a British artist and writer. He is general secretary of the International Necronautical Society, a semi-fictional avant-garde network, and has published numerous stories and essays. Remainder, his first novel, received the Believer Book Award in 2008.
Simon Critchley (born 1960) is an English philosopher. He writes about the history of philosophy, political theory, religion, ethics, aesthetics, literature and theatre.
order
Introduction by Nicolas Bourriaud.
published in February 2013
English edition
13 x 20 cm (softcover)
280 pages (6 b/w ill.)
19.00 €
ISBN : 978-3-943365-34-4
EAN : 9783943365344
in stock

The Mattering of Matter