Postproduction – Culture as screenplay: How art reprograms the world 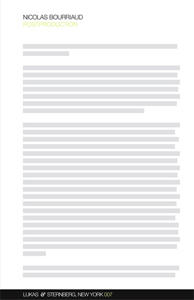 order
French writer and curator Nicolas Bourriaud discusses how, since the early nineties, an ever increasing number of artworks have been created on the basis of preexisting works; more and more artists interpret, reproduce, re-exhibit, or use works made by others or available cultural products.
This art of postproduction seems to respond to the proliferating chaos of global culture in the information age, which is characterized by an increase in the supply of works and the art world's annexation of forms ignored or disdained until now.
This book has been published in French by Les presses du réel in 2004.
French art critic, theoretician, and curator Nicolas Bourriaud (born 1965) was a cofounder and codirector of the Palais de Tokyo in Paris (2000–2006), Gulbenkian Curator for Contemporary Art at Tate Britain, director of the Ecole nationale supérieure des Beaux-Arts in Paris. He is currently the artistic director of Montpellier Contemporain, a new institution based in Montpellier, France, and dedicated to the contemporary arts. He is the author of the landmark publication Relational Aesthetics, published in 1998, and still inspirational today for many artists, curators, and art professionals worldwide.
order
Translated from the French by Jeanine Herman.
published in 2005
English edition
11 x 17 cm (softcover)
96 pages
15.00 €
ISBN : 978-0-9745688-9-8
EAN : 9780974568898
in stock 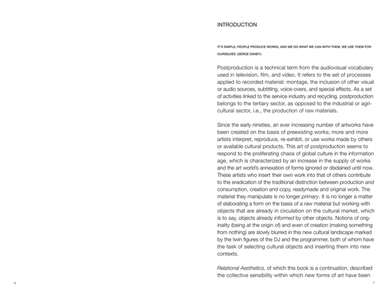 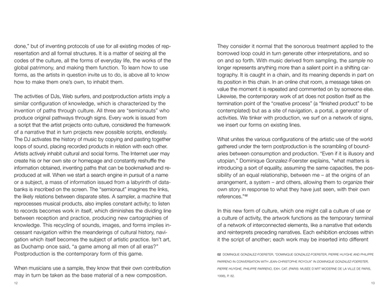