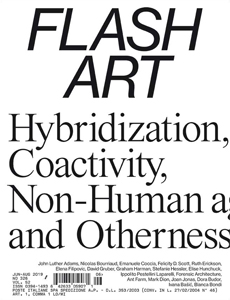 order
wishlist
The summer issue of Flash Art is an attempt to map the ecological breakdown that is restructuring our belief systems, forcing us to conceive of new relational modes that reappraise our centrality in the world and advocate for a new continuity with the other.
As we unlearn ways of thinking that have presumed the predominance of man, we will move toward a non-anthropocentric perspective that conceives of human existence in permanent hybridization with other living and/or artificial beings: bots, algorithms, plants, data, animals, minerals.
Issue #326 traces this radical paradigm shift through an interdisciplinary approach that includes numerous perspectives and methodologies. Included are analyses of artistic, architectural, curatorial, and sound-based practices that address the climate emergency, as well as essays by noted thinkers and practitioners including Graham Harman, Nicolas Bourriaud, John Luther Adams, Felicity D. Scott, Ippolito Pestellini Laparelli and Emanuele Coccia.
These are accompanied by texts that offer theoretical reflections on contemporary creativity. Features in this issue include in-depth texts on Forensic Architecture, Dora Budor, Joan Jonas, among others.
Such alternative visions, worldviews, and solutions are needed now more than ever in this time of radical transition.
Flash Art is an international quarterly magazine and publishing platform dedicated to thinking about contemporary art, exploring the evolving cultural landscape through the work of leading artists, writers, curators and others. One of Europe's oldest art magazines, Flash Art was founded in Rome in 1967, before relocating to Milan in 1971, and was originally bilingual, published in both Italian and English. In 1978 two separate editions were launched: Flash Art International and Flash Art Italia. Today the magazine remains one of the most recognizable and widely read publications of its kind, and is distributed in 87 countries.
order wishlist
published in June 2019
English edition
22,5 x 29 cm (softcover)
132 pages (color & b/w ill.)
15.00 €
in stock