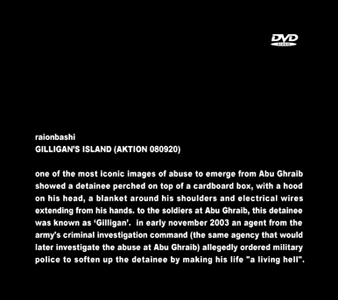 order
A performance piece about the Abu Ghraib tortures.
One of the most iconic images of abuse to emerge from Abu Ghraib prison showed a detainee perched on top of a cardboard box, with a hood on his head, a blanket around his shoulders and electrical wires extending from his hands. to the soldiers at Abu Ghraib, this detainee was known as ‘Gilligan'.  in early november 2003 an agent from the army's criminal investigation command (the same agency that would later investigate the abuse at Abu Ghraib) allegedly ordered military police to soften up the detainee by making his life "a living hell".


* see also 1.Konditionstraining – Aktion 040918
Performed 20th September 2008 at Scheld'apen, Antwerp.
Edition of 30 hand numbered copies.
Raionbashi is the alias of Daniel Lowenbrück (born 1974), a German performance artist, composer of tape-music and (sometimes) visual-artist living in Berlin. He is releasing music and performing internationally since the 90's as part of the Schimpfluch-Gruppe (with Rudolf Eb.er, Dave Phillips, Joke Lanz), as a duo with singer and performance artist Doreen Kutzke, as part of the Cabaret Performance-Group Ohne (with Tom Smith, Dave Phillips, Reto Mäder), and solo as Raionbashi and under his real name, including performances and festival appearances in New York, Paris, Moscow, Minsk, London, Oslo, Stockholm, Helsinki, Tokyo, Vienna etc. He has collaborated with Mattin, Column One, and lately with Leif Elggren and Marcellvs L. He founded the label Tochnit Aleph in 1994 publishing records and editions of Musique Concrete, Sound Poetry, Artist-Records & -Multiples and Noise Music. Since 2008 Löwenbrück curates the Gallery & Record-Shop Rumpsti Pumsti (Musik) in Berlin.
order
published in August 2010
French edition
PAL DVD (color)
07'49''
20.00 €
in stock
(last copies available!) 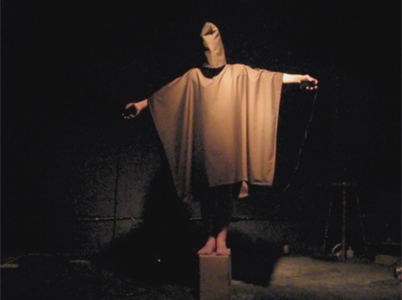