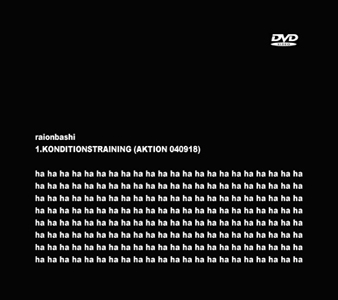 wishlist
A performance piece about weakness and public embarrassment.
Two performances* that are mirroring the universal human situation of being exposed for oppression and violence in this eternal hell on this planet. Two performances that are exposing the everyday situation for most people on this planet; either you are a prisoner of war or a young kid on the school yard or whoever, wherever when there is a chance for humiliation and ridicule and torture, may it be physical or mental; a situation that is well known in this injustice and unfair society we call paradise on earth. Maybe the arts is the only way out? In the early days they told us it was religion...
Leif Elggren


* see also Gilligan's Island – Aktion 080920
Performed 18th September 2004 at Die Sibirische Zelle, Berlin.
Edition of 30 hand numbered copies.
Raionbashi is the alias of Daniel Lowenbrück (born 1974), a German performance artist, composer of tape-music and (sometimes) visual-artist living in Berlin. He is releasing music and performing internationally since the 90's as part of the Schimpfluch-Gruppe (with Rudolf Eb.er, Dave Phillips, Joke Lanz), as a duo with singer and performance artist Doreen Kutzke, as part of the Cabaret Performance-Group Ohne (with Tom Smith, Dave Phillips, Reto Mäder), and solo as Raionbashi and under his real name, including performances and festival appearances in New York, Paris, Moscow, Minsk, London, Oslo, Stockholm, Helsinki, Tokyo, Vienna etc. He has collaborated with Mattin, Column One, and lately with Leif Elggren and Marcellvs L. He founded the label Tochnit Aleph in 1994 publishing records and editions of Musique Concrete, Sound Poetry, Artist-Records & -Multiples and Noise Music. Since 2008 Löwenbrück curates the Gallery & Record-Shop Rumpsti Pumsti (Musik) in Berlin.
wishlist
published in August 2010
PAL DVD (color)
05'35''
sold out 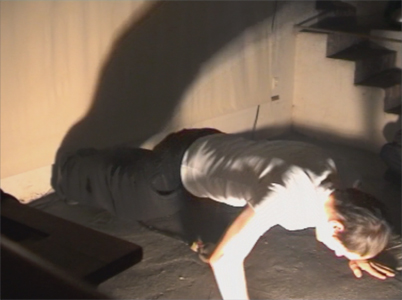