Mattin (Martin Artiach, born 1977 in Bilbao) is a sound artist working with noise and improvisation. His work seeks to address the social and economic structures of experimental sonic artistic production through live performance, recordings and writing. Using a conceptual approach, he aims to question the nature and parameters of improvisation, specifically the relationship between the idea of ”freedom”and constant innovation that it traditionally implies, and the established conventions of improvisation as a genre. Mattin considers improvisation not only as an interaction between performers and instruments, but as a situation involving all the elements that constitute a concert situation, including the audience and the social and architectural space. He tries to expose the stereotypical relation between active performer and passive audience, producing a sense of strangeness and alienation that disturbs this relationship. He is currently doing a PhD at the University of the Basque Country under the supervision of Ray Brassier and Josu Rekalde. He has edited with Anthony Iles the book Noise & Capitalism and in 2012 CAC Brétigny and Tuamaturgia published Uconsitituted Praxis, a book collecting Mattin's writing plus interviews and reviews from performances that he has been part of. Both books are available online. 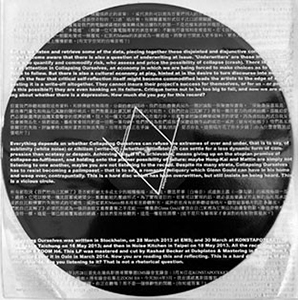 Mattin, Hong-Kai Wang
Collapsing Ourselves (vinyl LP)
2014
Mount Analogue
currently out of stock
This vinyl LP stems from a series of performances by sound artists Mattin and Hong-Kai Wang. The recording consists of a superimposition of four layers of conversations between the two artists.