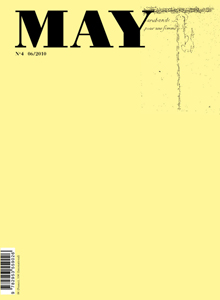 order
Fulvia Carnevale, Entrée en matière / The Milan Women's Bookstore Collective, Sexual Difference: A Theory of Social Symbolic Practice (Chapter One) / Antonella Nappi, Nudity / Lea Melandri, Autonomy and the Need for Love, Carla Lonzi, Vai Pure / Lea Melandri, The Ongoing Practice / Carla Lonzi, Let's Spit on Hegel / David Lewis, Sturtevant, “The Razzle Dazzle of Thinking” / Josef Strau, Why working together with an inner Voice / Tony Conrad, Improvisation, Power, Cultural History-bending / Alex Kitnick, In Fashion. Josephine Pryde / Thomas Boutoux, François Piron et Benjamin Thorel, Conversation avec Mathieu K. Abonnenc, Clara Schulmann, “Nothing rings a bell?”, Brice Dellsperger, Body Double 22 / Jay Chung, D5 and the Gesture of Withdrawal / Leonor Antunes, the spherical space of James Benning.
The fourth issue of MAY makes an atypical choice by publishing a very large section of archival material coming from what is called the“feminist nebula” in Italy in the 1970s. The value of these documents is not only political but sentient, too, insomuch as they question the texture and organization of what is said to be the world, love, our bodies, and our place in society. As far as the topicality of these texts is concerned, they trigger an exciting dialogue with the present, constructing a constellation between the world's need for freedom today and the need that this recent past, teeming with conflicts and shrouded by oblivion, saw expressed so forcefully and so clearly. Beyond their great historical, aesthetic and literary value, they contribute to the line of thinking pursued by the magazine to re-posit the terms of a social critique in relation to the critique of present-day artistic production.
Conceived as a collective space in which to develop thoughts and confront positions on artistic production, May magazine examines, twice a year, contemporary art practice and theory in direct engagement with the issues, contexts and strategies that construct these two fields. An approach that could be summed up as critique at work – or as critique actively performed in text and art forms alike.
Featuring essays, interviews, art works and reviews by artists, writers and diverse practitioners of the arts, the magazine also intends to address the economy of the production of knowledge – the starting point of this reflection being the space of indistinction between information and advertisment typical of our time. This implies a dialogue with forms of critique produced in other fields.
order
published in June 2010
texts in English and French
17,5 x 24 cm (softcover)
216 pages (60 b/w ill.)
8.00 €
ISBN : 978-2-9535590-3-3
EAN : 9782953559033
in stock
table of contents