The life and work of Carla Lonzi (1931–1982) is inseparable from the cultural, political, and social history of Italy in the decades following the Second World War; she occupies a singular position, which today merits reevaluation. A reputed art critic of the 1960s artistic scene, both friend and collaborator of such figures as Carla Accardi, Luciano Fabro, Giulio Paolini, and Jannis Kounellis, she wrote “Autoportrait” in 1969, a “love letter” to the artists and to creation, but also a farewell chorus to art criticism and the art world. The following year she founded Rivolta Femminile, an active feminist collective, thus becoming the central figure of Italian feminism. 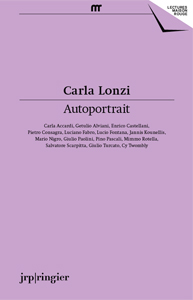