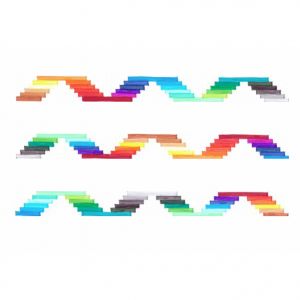 order
wishlist
Sébastien Roux pushes Max Neuhaus' concept of succession of timbres to a new height in a drastically systematic composition.
In 2016, Sébastien Roux presents Succession of timbres with one partial in common as part of the exhibition Max Feed – Work and Heritage of Max Neuhaus, organized by Daniele Balit at Frac Franche-Comté. The title refers to and summarizes two sentences written by Neuhaus in the text that accompanies the drawing, and thus immediately reveals the influence of the Southwest Stairwell works—the experience of the staircase and that of Neuhaus' drawing. It is a sound installation for a set of six loudspeakers that are perfectly aligned and equally spaced over a distance of ten meters along a wall. Also here, the work is based on a succession of timbres. But Roux pushes the concept of succession and Neuhaus's description of this principle to a new height in a drastically systematic composition:
"The basis for the upcoming timbre is a partial of the previous one. Each speaker represents a partial, a timbre is fully formed and complete when the six speakers are active. Once the full timbre has been maintained for about ten seconds, the partials disappear again, one after the other. The last partial that remains then serves as a basis for the construction of a new timbre."
"(…) Be it in a different manner, our hearing also is underlined in Roux's work because we get the impression that we are able to indeed grasp the movement within the tones that have been flattened out before our eyes and ears. The focus on the construction of the different timbres is accompanied by the perception of their constant and gradual modification, in which the sounds never cease to elude us. This refined listening, which implies an awareness of the fleetingness of the projected sounds, thus becomes spatial as well as temporal. If Roux proposes, like Neuhaus, a certain re-focusing as part of our hearing, in its relation between form and concept, Succession of timbres with one partial in common differentiates itself from Southwest Stairwell. While Neuhaus insists on an indeterminate perceptual experience and refuses any explanation of the work, Roux provides us with the keys to decipher the construction of his piece through all the elements that constitute it: title, installation, composition, drawings. The sonic and even musical relationships - within the piece as well as between Roux's work and that of Neuhaus - are indeed reflected through these different elements and the ways in which they refer to each other. On the other hand, it is impossible to detach our listening experience from our reflection on the concept of the work, which in turn refers back to the work on which it is based."
—Anne Zeitz
Artkillart · Sébastien Roux, "Succession of timbres with one partial in common" AKR03 - BANDE TEST
Composer Sébastien Roux writes electronic music, and presents it in diverse formats, from CD's and records, to public listening sessions, sound installations, sound walks, and radio pieces. In 2011 he began to develop an approach focused on principles of translation, analyzing the structures of preexisting art works (visual, musical, literary) and transposing them into scores for new works (radiophonic or electroacoustic taped music). He regularly collaborates with Célia Houdard (writer), Olivier Vadrot (designer), DD Dorvilliers and Sylvain Prunenec (choreographers).

Published with the Frac Franche-Comté.
published in November 2020
22.50 €
in stock