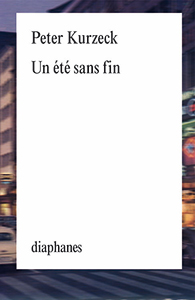 order
Alternately compared to Joyce, Proust, and Döblin, German writer Peter Kurzeck is nonetheless underestimated. Dedicated to Kurzeck's childhood, this autobiographical publication restores the seductive magic of Frankfurt in the late 1950s, through a reflection on the poetic force of memory. The original narrative was released in 2007 as a German audio-book.
Peter Kurzeck (1943-2013) was a German writer. He lived between Frankfurt and Uzès, in the South of France. He has won numerous literary prizes (Alfred-Döblin in 1991, Hans-Erich-Nossack in 2000, and Georg-Christoph-Lichtenberg in 2008). His main project, an autobiographical chronicle in twelve volumes, had a great impact on German literature.
order
Translated from the German by Cécile Wajsbrot (original title: Ein Sommer, der bleibt. Peter Kurzeck erzählt das Dorf seiner Kindheit, Supposé Verlag, 2007).