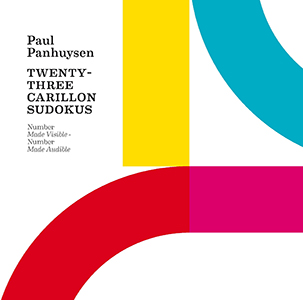 order
This recording is the sonic counterpart to Dutch artist Paul Panhuysen's last visual work Oog & Oor—a colorful design whose structure was built from sudoku puzzles. Panhuysen used the same principle to compose these sudoku-based pieces in collaboration with carillonneur Rosemarie Seuntiëns.
Carillon Sudokus is the sonic counterpart to Oog & Oor (Eye & Ear), the last work that Dutch sound and visual artist Paul Panhuysen (1934–2015) realized. Oog & Oor was a design made with his daughter Sappho Panhuysen for a temporary installation in the lighted column of the Rietveld bus shelter next to the town hall of Eindhoven. It is a further development from Eight Double Sudokus, a series of large-scale prints exhibited at Museum De Pont in Tilburg in 2012. Both designs were created using sudoku puzzles and comprise various shapes of different colors whose structure was derived from the number sequences present in individual sudokus. Panhuysen used number systems such as magic squares, the Fibonacci series and the Golden Ratio in much of his art because he felt that instead of limiting his artistical freedom, such systems allowed him to make new discoveries and realize works that transcended his own imagination.
“A system is evidently at work behind the order of colours and shapes in these prints. On the other hand it is far from obvious what the underlying order actually is. Coloured bands and arcs converge in a rhythmic play of lines. Some originate from the same point, joining to form a right angle or part of a circle. Others touch only at the point or remain loose ends in a wave of motion. The orderliness of the structure and the erratic behaviour of the straight and curved lines strive for predominance in the series.” (from the liner notes by René van Peer).
These principles can also be applied to pitch and musical phrases. For Eight Double Sudokus, Panhuysen composed eight pieces for piano that were heard during the exhibition. For Oog & Oor, he envisioned music for the carillon on the roof of the Eindhoven town hall. The original idea was to generate 365 sudoku-based pieces, one for each day of the year that the installation was to be shown. In the end, around 50 pieces were realized in collaboration with town carillonneur Rosemarie Seuntiëns. Side A of this LP contains 11 pieces played live by Seuntiëns on the ceremonial ending of Oog & Oor on August 28, 2015. Side B features 12 pieces played mechanically by the carillon.
Edition of 300 copies.
Artist, musician, performer, organizer, Paul Panhuysen (1934, Borgharen – 2015), after having studied painting and monumental design at the Jan van Eyck Academy in Maastricht, and art sociology at the University of Utrecht, was, successively, the director of the Fine Arts Academy in Leeuwarden, and a curator and head of education and public relations for the Den Haag City Museum and for the Van Abbe Museum in Eindhoven. In addition, he continued to paint and make collages.
In 1965 he founded the artist group “De Bende van de Blauwe Hand.” This group, which was closely related to Fluxus, presented exhibitions, environments and happenings in museums and galleries. Starting in 1965, he presented “situations” meant to involve the audience, and in 1968, he started the Maciunas Quartet, who are still making experimental music as the Maciunas Ensemble. In the early seventies, Panhuysen worked as an advisory artist with urban development teams (o.a. in Zoetermeer, Lunetten, Maaspoort) and developed systematic ordering systems and mathematical series that he has continued to use in his work as an artist. In addition, Panhuysen's work shows a predilection for found objects and the element of chance. To an increasing degree, Panhuysen has been concentrating on sound art, which has come to occupy an important place in his visual art work. He has presented his Long String Installations, which are played in concerts personally and in exhibitions as automats,worldwide in festivals since 1982 . These installations are set-up in indoor or outdoor spaces for anywhere from 1 to 40 days, using specific properties and architectural prospects of the location.
Since 1989 Panhuysen developped artworks in which he confronts the audience with the creativity, intelligence and communicational skills of animals, especially of birds.
In 1980, Panhuysen founded Het Apollohuis, and since then till 1997, he has been the director of this internationally oriented podium where artists from divergent disciplines did present their work. In 1996 he received the Cultural Award of Noord-Brabant and in1998 he became Companion of the Order of the Dutch Lion. In 2004 Panhuysen received in the category Digital Musics from PrixArs Electronica an Honory Mention for the composition A Magic Square of 5 to Look at / A Magic Square of 5 to Listen to.