Duchamp – The Paradigm of the Cartoon 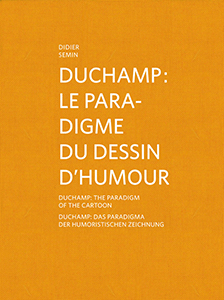 order
wishlist
The influence of cartoon on Duchamp's work.
At the very beginning of his career, Marcel Duchamp frequented the world of cartoonists rather than that of painters. Indeed, his first drawings were published in satirical magazines. Might not the paradigm of the cartoon (the effective combination of caption and drawing) therefore be seen as the general matrix of most of his works?
Didier Semin has taught art history at the École nationale supérieure des Beaux-Arts in Paris since 1998. He has been curator at the Musée de l'Abbaye Sainte-Croix in Sables d'Olonne, then at the Musée d'art moderne de la Ville de Paris and at the Musée national d'art moderne. He organized numerous monographic and thematic exhibitions, including Kurt Schwitters retrospective and, in collaboration with the philosopher Georges Didi-Huberman, L'Empreinte (Imprint) at the Centre Georges Pompidou. He is the editor of a book series devoted to the writing of artists, published by ENSBA
order wishlist
Published with Verlag für moderne Kunst, Nuremberg.
published in December 2015
trilingual edition (English / German / French)
10,5 x 14 cm (hardcover, cloth binding)
116 pages (4 color ill. & 13 b/w ill.)
25.00 €
ISBN : 978-3-903004-56-6
EAN : 9783903004566
in stock