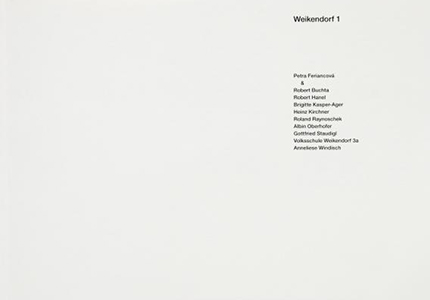 order
These books are based on two different projects led by the artist during a site-specific exhibition at a gallery in Weikendorf, a little town in Lower Austria. For the first, she invited the local community to bring her photographs that would describe their lives in Weikendorf and exhibited it. The second project includes a black and white photographic installation playing on the reflections of an old fire station.
“The inhabitants of Weikendorf are the main audience [of the Kunstraum Weikendorf], they pass by every day. At once I get an idea to work with people, almost all of whom designed, built and took care of their homes. They all chose the space they live in, they keep it up and improve it. The presence of the gallery space must have some significance for them and perhaps if their own works were on display, they would view the white cube with pride and joy. Since I did not know much about Weikendorf before, I thought about asking people to help me get to know by sharing and experiences and knowledge about their town. I would ask them to choose and photograph something they created, something they are proud of, for instance they house, harvest, home-cooked meals or baked goods, even their families and let me exhibit their photographs. The photographs would be split into genres (still life, portrait, landscape, etc.) or even better into categories (the people, their work, their hobby, their flowers and trees, their houses, their animals, etc.)”
Petra Feriancová on Weikendorf I.