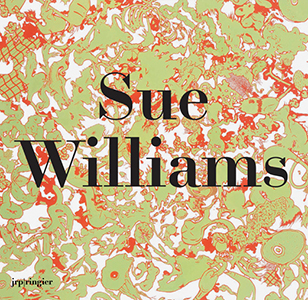 order
In over 40 years, Sue Williams' art has continuously explored and challenged the fantasies of feminism, sexuality, gender, and culture. This first comprehensive monograph dedicated to the American artist follows her work from the early 1980s to her most recent paintings.
As Ruth Erickson explains in her essay, “Wanting to paint as a student at CalArts in the 1970s heyday of conceptualism, and interested in drawing as a young artist during the painting boom of the 1980s in New York, Sue Williams tends to occupy the margins. She productively and selectively works out of step with dominant trends and discourses, devising visual strategies that engage the contexts of contemporary art and politics in striking ways. Over the course of her 40-year career, Williams has made an array of artwork, from modest paintings of mostly representational scenes in a cartoonish style to large-scale abstract paintings erupting in brilliant colors.” Sue William's paintings have constantly straddled a narrow line between figurative depiction and complete abstraction, as in some works of the early 2000s, in which the monochromatic brushstroke becomes a central element. In her newest works, these two realms are mixed anew, for although the images are abstract, the beholder comes across recognizable details—individual body parts or formations reminiscent of human organs.
Throughout her practice she has explored ambiguous boundary between a secure place and an insecure one, between the real and the imagined, drawing the viewer into her world of provocative sexual politics.
Sue Williams (born 1954 in Chicago, lives and works in New York) came to prominence in the early 1980s, with works that echoed and argued with the dominant postmodern feminist aesthetic of the time. In the years since, her focus has never waned yet her aesthetic interests have moved toward abstraction along with her subject matter and memories. She has had solo shows at the Vienna Secession, Geneva Center for Contemporary Art, and Staatliche Kunsthalle Baden-Baden, Germany, along with being included in 3 consecutive Whitney Biennials, New York.
order
Edited by Lionel Bovier.
Texts by Johanna Burton and Ruth Erickson.
published in December 2015
English edition
28 x 27,2 cm (hardcover)
144 pages (100 color & 50 b/w ill.)
60.00 €
ISBN : 978-3-03764-374-7
EAN : 9783037643747
in stock