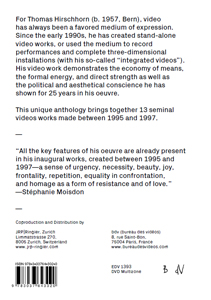 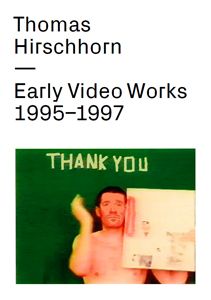 order
wishlist
An anthology.
For Thomas Hirschhorn, video has always been a favored medium of expression. Since the early 1990s, he has created stand-alone video works, or used the medium to record performances and complete three-dimensional installations (with his so-called “integrated videos”). His video work demonstrates the economy of means, the formal energy, and direct strength as well as the political and aesthetical conscience he has shown for 25 years in his oeuvre.
This unique anthology brings together 13 seminal videos works made between 1995 and 1997.

“All the key features of his oeuvre are already present in his inaugural works, created between 1995 and 1997—a sense of urgency, necessity, beauty, joy, frontality, repetition, equality in confrontation, and homage as a form of resistance and of love.”
—Stéphanie Moisdon
One of today's leading international Swiss artists, Thomas Hirschhorn (born in 1957, lives works in Paris since 1984) is the author of a large body of work (site-specific installations, films, drawings, etc), immediately recognizable for its political conscience and its formal vocabulary. His work elicits debate, analysis, and a profound discussion of artistic and social issues.
order wishlist
Text by Stéphanie Moisdon.
published in February 2013
13,5 x 19 cm
DVD Multizone, PAL/SECAM, 77'
25.00 €
ISBN : 978-3-03764-302-0
EAN : 9783037643020
in stock