On Trials – A manual for the theatre of law 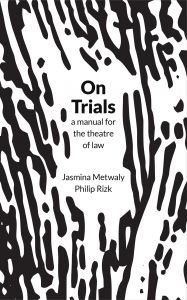 order
wishlist
An exploration of the performativity of the law within Egypt's spectral legal reality.
The publication dissects material collected for Jasmina Metwaly and Philip Rizk's film On Trials, a work-in-progress that uses modes of documentary and fiction making. In it, they reflect on sites where legal proceedings take place. And listen to all manner of actors from within the realm of the law including, lawyers, a TV camera operator who frequents courtrooms, a former inmate, on whose body the legal specter has left unutterable marks, and tailors who specialize in uniforms.
Born to an Egyptian father and a Polish mother, Jasmina Metwaly is a Cairo-based artist and filmmaker, and member of the Mosireen collective. She likes to work with people and their histories, texts, archives, images, scripts and drawings. She is interested in how stories create stories, and how they leave the space of one reality and enter another, intertwining the boundaries of both. Rooted in performance and theatre, her works focus on process-based practices that have a social function that generates tension between participants and audiences.
Filmmaker, writer and freelance journalist Philip Rizk was born in Germany, raised in Egypt and is based in Cairo. His practice has moved beyond the documentary mode that directly engages with realities of historical moments, allowing the documented image to be infiltrated by imaginary worlds. Rizk is part of the video collective Mosireen.
order wishlist
Graphic design: Vangjush Vellahu & Jasmina Metwaly.
published in July 2022
bilingual edition (English / Arabic)
12,5 x 20 cm (softcover)
108 pages
12.00 €
ISBN : 978-3-948212-66-7
EAN : 9783948212667
in stock