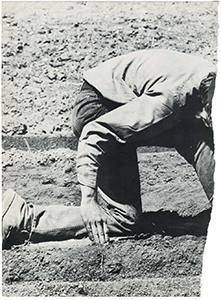 order
Summer Winter East West discusses Martin Beck's engagement with display not only as a tool of presentation but also as a form of communication—within and beyond the realm of the exhibition.
Display and its social dimensions are leitmotifs in the multiform art practice of Martin Beck. His exhibition “Last Night” at Kunsthaus Glarus reflected on the relations between exhibiting and community by bringing together two bodies of works: one drawing on modern exhibition history, the other building on the history of countercultural communes in the 1960s and early '70s United States.
What are the possibilities for imaging community? How can togetherness be presented (or present itself), and to what degree is exhibiting already an aspect of community building?
Published following the exhibition “Last Night” at Kunsthaus Glarus, Switzerland, from September to November 2013.
Martin Beck (born 1963 in Bludenz, Austria, lives and works in New York and Vienna), an artist whose interests lie at the intersection of art, design, architecture, and historical inquiry, is concerned with shifts and changes of perspective that occurred in the period of late modernism; how their material, formal, and social structure impacts contemporary culture. A number of projects developed over time include investigations into the history of communal living, notably the famous American commune of Drop City; the emerging discourse on ecology and politics at the 1970 International Design Conference in Aspen, Colorado; student protest and history writing in the case of the brutalist Art and Architecture Building by Paul Rudolph at Yale University; and the impact of modularity on the exhibition, exemplified by designer George Nelson's Struc-Tube display system, etc. Beck distills from these references a paradoxical coexistence of emancipatory promises and logics of control that run through and between them.
An interrelated concern for Beck is what generates form making and what rules govern it, whether it be forms of organization, display, communication, enunciation, knowledge, or research and how it comes together, operates, and is perceived in the format of the exhibition. Conversely, in using the exhibition as a medium, Beck asks how the exhibition and the artworks therein provide and negotiate a space for this investigation.
Martin Beck holds a professorship at the Academy of Fine Arts of Vienna. In conjunction with his artistic practice, Beck also writes critically about art, design, and architecture. He occasionally also works as an exhibition designer.
order
Edited by Christina von Rotenhan and Sabine Rusterholz Petko.