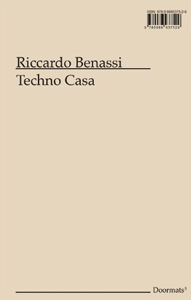 order
wishlist
Essay, sentimental diary, and critical pamphlet, Techno Casa binds together the textual production originally composed for a series of eleven video works presented during 2013 through site-specific installations.
Through an all-encompassing stream of consciousness, Riccardo Benassi delivers a critical reflection on the impact of technology in our daily relation to space, and how technological devices have radically altered the structures for living and organizing the real, from architecture to politics and cultural production and consumption.
Techno Casa is the fifth issue of the book series Doormats published by Errant Bodies Press. The series aims at contributing to the now, addressing issues that are present and that demand presence.
Riccardo Benassi was born in Italy in 1982, grew up in Cremona, on the banks of the river Po and currently lives and works in Berlin. Frequently collaborating with architects, artists, curators, musicians and theoreticians, Benassi is considered one of the most prolific Italian artist of his generation and an active agitator of the European underground experimental music scene. Operating within a range of international contexts, Riccardo Benassi's works are the result of an articulated assemblage of images, sounds, colors, texts, functional objects, and diverse materials, which are put together to generate large-scale installations, videos, performances, artist's books and sculptural elements in which the visual part is one of the many elements that compose the final result. He recently published Letters from the Passenger Seat with No One at the Wheel (Mousse Publishing 2010), Briefly, Ballare (Danilo Montanari 2012), and Attimi Fondamentali (Mousse Publishing 2013).
order wishlist
published in April 2015
bilingual edition (English / Italian)
11,4 x 17,8 cm (softcover)
136 pages (b/w ill.)
10.00 €
ISBN : 978-0-9889375-2-9
EAN : 9780988937529
in stock