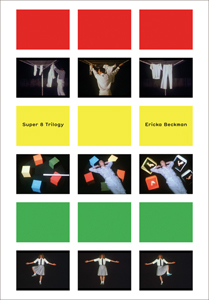 order
Ericka Beckman's Super-8 trilogy.
Beckman began making films in the mid-1970s using Super-8 sound film. Neither documentaries nor narratives, these works, as Jim Hoberman puts it, are "like primitive cartoons ... enigmatic allegories filled with nervous activity and comic violence, sexual imagery ... perceptual game­ playing and ingenious optical effects."
This first anthology brings together three pieces from 1978-1980: We Imitate; We Break Up (1978); The Broken Rule (1979); and Out of Hand (1980), made after her CalArts studies and featuring many other artists as actors.
Over her three-decade career, Ericka Beckman (born 1951 in Hampstead, NY, lives and works in New York)'s playful yet formally demanding films challenge traditional aesthetic, and cultural values, that mix games with fairytales to create hybrids with new rules. Beckman uses play in every sense to shape her message. “The result is a ‘satisfying, even delightful slipperiness of meaning, a mental vertigo induced by the changefulness of contexts and rules in regard to a given word or object” (Sally Banes Millenium Film Journal, 1984).
Beckman's work has been shown at festivals, museums, and galleries around the world. Her one-woman shows include: the Museum of Modern Art, New York, the Smithsonian's Hirshhorn Museum, Washington,D.C., and the Walker Art Center, Minneapolis. She has been in three Biennials at the Whitney Museum of American Art, New York. Amongst the numerous awards received for her work are: two grants from the National Endowment for the Arts, two New York State Council on the Arts grants, and one from Massachusetts Council on the Arts. Her works are in the film collection of New York's Museum of Modern Art, Anthology Film Archives, plus the British Film Institute, as well as The Walker Art Center Media Collection.
order
Edited by Lionel Bovier.
published in June 2013
French edition
13,5 x 19 cm, 12 pages booklet
68'
37.00 €
ISBN : 978-3-03764-259-7
EAN : 9783037642597
in stock
press releases
Critique d'art, François Aubart, 2014 (PDF)