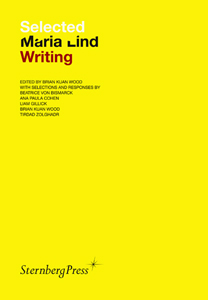 order
Twenty-two essays selected by Beatrice von Bismarck, Ana Paula Cohen, Liam Gillick, Brian Kuan Wood, and Tirdad Zolghadr.
Working in a number of contexts and capacities has shown Maria Lind to be a curator who, over time, has engaged in a rethinking of the art institution and the formats and methodologies connected with it, taking art itself as a starting point. Following on the various endgames outlined by institutional critique, Lind has forged paths out of hegemonic institutional regimes precisely by identifying other ways of working through them, from both inside and outside.

For Lind, writing is integral to her curatorial work. It is where she accounts for her decisions, explains her intention, justifies her interest, toys with new possibilities and develops new ideas, and recognizes historical precedents. It is where the craft of curating, already pointed out towards a public, finds another channel of articulation.