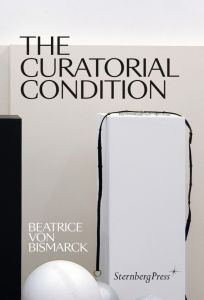 order
wishlist
An analysis of the relations created by the curatorial—relations that also constitute it.
In The Curatorial Condition, Beatrice von Bismarck considers the field of activity and knowledge that relates to the exhibiting of art and culture. The curatorial, in her analysis, is a domain of practice and meaning with its own conditions, rules, and procedures. Focusing on the relations between human and nonhuman participants, she emphasizes the interplay of the process of curating, the subjective approach of the curator, and the presentational format of the exhibition.
Alongside the concept of curatoriality, von Bismarck introduces three additional concepts that view the curatorial condition in terms of relations: constellation, transposition, and hospitality. Within each section, she presents case studies of exhibitions and artistic practices since 1969 that profoundly altered the curatorial and whose importance is still felt today.

"Over decades as a curator, scholar, and theorist, Beatrice von Bismarck has played a central role in defining the field of the curatorial. In this book, she develops a rigorous framework for understanding its structures, conditions, and relations, offering an invaluable resource for navigating this arena of theory and practice. Locating the curatorial firmly in the realm of collectivity and becoming-public, she also provides a conceptual bulwark against the forces of individualization and privatization that have come to dominate so much of the cultural field."
— Andrea Fraser, artist and professor, Department of Art, University of California, Los Angeles

"We have long needed a book that both brings together the many explorative activities of artists, curators, and theorists and provides us with an array of conceptual tools of analysis and encounter. Finally, we have it. Lucid, generous, and expansively illustrated, The Curatorial Condition takes the greatly expanded field of the curatorial as one of diverse knowledge production."
— Irit Rogoff, writer, curator, and professor of visual cultures, Goldsmiths, University of London
Beatrice von Bismarck is Professor of Art History at the Academy of Fine Arts (Hochschule für Grafik und Buchkunst) Leipzig, where she also teaches Visual Culture and Cultures of the Curatorial.
order wishlist
Graphic design: Surface.
published in July 2022
English edition
12 x 20,5 cm (softcover)
304 pages (35 b/w ill.)
20.00 €
ISBN : 978-3-95679-534-3
EAN : 9783956795343
in stock