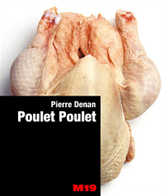 Artist's book.
37 foodstuffs bought from Monoprix store, photographed in high angle shots, lit by electric light. The container and the contents have been dissociated and given names: their respective statuses (Chicken Chicken, Sardine Sardine, Cooked ham Cooked ham, etc.) appear on the top left corner of each page.
Pierre Denan has founded M19 (May 19), a structure for the conception and publication of magazines, books, and other printed media intended for the dissemination of original artworks as well as critical texts. An artist and an writer, he is the editor of magazines such as MAP, 20/27, AH AH AH, Grams of art, as well as the artists' books series I.S. Inventaire Supplémentaire.
17 x 20 cm (softcover)
80 pages (color ill.)
ISBN : 978-2-9516123-4-1
EAN : 9782951612341
sold out