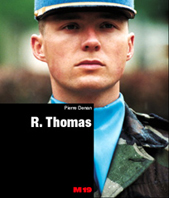 wishlist
Artist's book.
Photograph of soldier R. Thomas, selected from the documentation fund of the ECPA (the communication and audiovisual production department of the French Ministry of Defence) at the fort of Ivry.
It is a portrait of a young soldier, tightly framed, 3/4 frontal, wearing a sky blue kepi, a camouflage battledress, the initials of his surname and first name visible in the bottom left part of the picture, which is reproduced exactly on each page of the book.
Pierre Denan has founded M19 (May 19), a structure for the conception and publication of magazines, books, and other printed media intended for the dissemination of original artworks as well as critical texts. An artist and an writer, he is the editor of magazines such as MAP, 20/27, AH AH AH, Grams of art, as well as the artists' books series I.S. Inventaire Supplémentaire.
wishlist
17 x 20 cm (softcover)
80 pages (color ill.)
ISBN : 978-2-9516123-2-7
EAN : 9782951612327
sold out