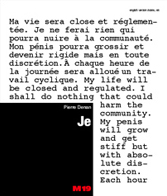 wishlist
Artist's book.
This text puts forward a series of procedures to follow, which substitute not only for the biblical injunctive form of the Decalogue, but also for all modern forms of ideological injunction (watchwords). In an absolutely correct line, the reader/narrator chants a programme which, if followed, guarantees a certain social transparency. This manner of moral, decent and often absurd self-imprisonment, is experienced by each of us, at best as an accomplished form of freedom, at worst as a "lesser evil".
Pierre Denan has founded M19 (May 19), a structure for the conception and publication of magazines, books, and other printed media intended for the dissemination of original artworks as well as critical texts. An artist and an writer, he is the editor of magazines such as MAP, 20/27, AH AH AH, Grams of art, as well as the artists' books series I.S. Inventaire Supplémentaire.
wishlist
bilingual edition (English / French)
17 x 20 cm (softcover)
80 pages (color ill.)
sold out
excerpt