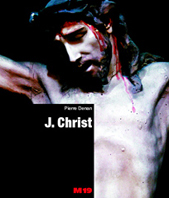 wishlist
Artist's book.
37 representations with proper nouns. 37 Christs photographed in as many Roman churches. From non-representation (as with the taboo of the image of God in Islam) to the image of a polymorphous, over-represented body, admittedly unified/uniform in its diversity, yet above all symbolic of the true stakes of representation : the body.
Pierre Denan has founded M19 (May 19), a structure for the conception and publication of magazines, books, and other printed media intended for the dissemination of original artworks as well as critical texts. An artist and an writer, he is the editor of magazines such as MAP, 20/27, AH AH AH, Grams of art, as well as the artists' books series I.S. Inventaire Supplémentaire.
wishlist
17 x 20 cm (softcover)
80 pages (color ill.)
sold out