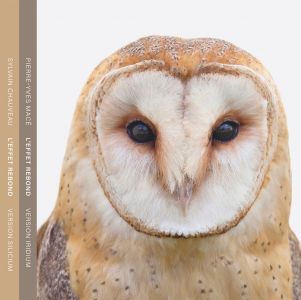 order
wishlist
A double-creation with four hands, surprising, intelligent and sensitive, between minimal experimentations, avant-garde pop and dissonance.
"L'effet rebond" is not one album but two. Two parallel albums sharing the same title. One by Pierre-Yves Macé, the other by Sylvain Chauveau—two friends and regular collaborators for nearly twenty years.
Both works come from the same original material: a few tracks of guitar, piano, harmonium and vocals, initially recorded by Chauveau. The lyrics (in French, English, Japanese) are very short poems by or quotations from e.e. cummings, Thelonious Monk, John Cage, Basho, cult tennis player John McEnroe, Carla Demierre, Aram Saroyan, Joseph Guglielmi, and painter Philip Guston. From this common material, each of the two composers has built his own edifice, choosing the elements he keeps, the ones he abandons, adding little by little his own instruments, structures and ideas. In the end, two distinct and autonomous opuses are born.

Iridium version
Pierre-Yves Macé has allowed himself to be guided by his long-standing obsessions: hybridisation of genres and formats, balance between lyricism and formalism, intersection of chamber instrumental writing and chiselled electronics. But this time he pushes his penchant for sobriety further than ever. Whether it is a song-haiku, a miniature for piano or a long repetitive and rhythmic piece, the simplicity is at the service of the clarity of the ideas and the beauty of the timbres - Maitane Sebastiàn's cello or Cédric Jullion's bass flute in mind.

Silicium version
Sylvain Chauveau has surrounded himself with his friends Peter Broderick (backing vocals), Machinefabriek (electronic processing), Lucille Calmel (field recordings), Romke Kleefstra (electric guitar) and Rainier Lericolais (electronic sounds) in order to develop more than ever his love of repetition and the ultra-short format. Here, the pieces often last only the time of a breath, of a few heartbeats. A musical form rarely explored in any musical genre, but one that Chauveau has been fond of since his early days and whose quintessence he seeks here.
Sylvain Chauveau (born 1971) has released more than ten records albums of delicate music, very minimal compositions for acoustic instruments, electronics and vocals, on labels such as FatCat, Type, Les Disques du Soleil et de l'Acier, Brocoli, and Sub Rosa. He has played live, and performed in many museums and art galleries, in Europe, Asia and North America, had tea with Éliane Radigue, created a seven-year long ultra-minimal composition, shaken hands with Ryuichi Sakamoto, conducted a label releasing one-off records only, and is featured on the compilation XVI Reflections on Classical Music (Point Music) alongside Philip Glass, Alvo Noto, and Gavin Bryars.
Pierre-Yves Macé (born 1980) is a composer and musicologist. His music stands at the nexus of contemporary classical, electroacoustic composition, sound and and radio art. It has been performed by Ictus and Ensemble Intercontemporain among others and published by labels such as John Zorn's Tzadik, Sub Rosa and Brocoli. He regularly writes scores for dance and theater shows, collaborating with directors Joris Lacoste, Sylvain Creuzevault, choreographers Emmanuelle Huynh and Fabrice Ramalingom.
order wishlist
published in November 2022
17.00 €
in stock