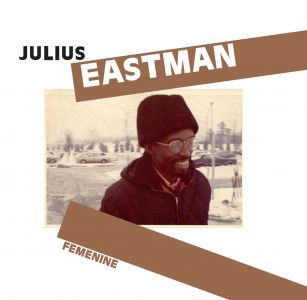 wishlist
Julius Eastman's major yet long-forgotten ensemble piece from 1974, dense and hypnotic, played by Ensemble 0.
Julius Eastman's Femenine is a piece that remains as a big and slow breathing, with something informal driving the listener to a near-hypnosis state. Four elements make its unchanging foundation: a precise timing, a tank of notes (the six first notes of the e-flat major scale), a short vibraphone pattern repeated over and over, and mechanically activated jingles, recalling György Ligeti's 100 metronomes, creating a constant process of phase shift between them and the vibraphone. The rest is only skeletons of melodic and rhythmic figures, that can vary feely, never to get stuck into a written score.
The last known version of Femenine performed during Eastman's lifetime happened in June 1975 at Buffalo Albright-Knox Art Gallery. This performance was played simultaneously with another one titled Masculine (now disappeared) in another part of the gallery.
Julius Eastman didn't impose anything, he used to propose, to try a lot. He insisted on the idea that composers should perform their own music. To revive a piece like Femenine, in which oral transmission will remain much more important than any score, can be seen as a sort of violation of the spirit of his music. But the only alternative would have been silence and oblivion.


Ensemble 0, diricetd by Stéphane Garin and Sylvain Chauveau, is a variable geometry group created in 2004. It interprets the compositions of its members and pieces by other composers. The group works with many regular and invited collaborators, being able to change, increase or reduce its lineup at will according to each project. Ensemble 0 has now become one of the most significant ensembles of a new sound vision.
For this piece Ensemble 0 includes Melaine Dalibert (piano), Sophie Bernado (bassoon), Cyprien Busolini (viola), Jozef Dumoulin (Fender Rodhes, synthesizer), Céline Flamen (cello), Stéphane Garin (percussion, artistic co-direction), Ellen Giacone (voice), Jean-Brice Godet (bass clarinet), Amélie Grould (vibraphone), Alexandre Herer (electronics), Tomoko Katsura (violin), Julien Pontvianne (saxophones, orchestration, artistic co-direction) and Christian Pruvost (trumpet).
Julius Eastman (1940-1990) was an American composer, pianist, vocalist, and dancer whose work fell under minimalism. He was among the first composers to combine minimalist processes with elements of pop music.
There was some for John Cage, then came Christian Wolff, and finally Morton Feldman, from this school in New York. Only Julius Eastman remained outside the game, the last figure, the most solitary and enigmatic—undoubtedly also one of the most powerful. In the 1970s and 1980s, Eastman was one of the very few African-Americans to gain recognition in the New York avant-garde music scene. He was politically committed, a figure of queer culture and a solar and solitary poet whose melancholy influenced his genius as well as his tragic destiny: suffering from various addictions, declared missing, actually homeless. During Winter of 1981-82, he got deported from his apartment by the police, who destroyed most of what he owned—including scores and recordings. He was found dead in 1990, on the streets of Buffalo, after years of vagrancy.
wishlist
published in February 2021
71'
EAN : 5411867115014
sold out