Michael Smith's (born 1951 in Chicago, lives and works in New York and Austin) videos, installations and performance works, produced both independently and in collaborations, explore contemporary mass media culture and its effects on those who experience it. The majority of Smith's work chronicles the dreams and adventures of his two main alter-egos: the extraordinarily prescient and sympathetic alter-ego, the naïve and somewhat inept Everyman “Mike” and “Baby Ikki”, an ambiguously ageless, sexless figure, as they each navigate (to varying degrees of success) the absurdities and alienation of the tragicomedy that is contemporary American life.
Recently, Mike and Baby Ikki both featured in Smith's debut ballet, Excuse Me!?!… I'm looking for the “Fountain of Youth.” In this earnest attempt on Mike's part to participate in the art world's contemporary interest in the medium of dance, the fictional characters' physical ineptitude is juxtaposed with the graceful professional dancers, choreography and music. Yet, by invoking the reciprocal artist/audience relationships of performance, the artist invites his viewers to identify and empathise with these archetypal figures even at their most ridiculous. Smith's filmed and live performances are also frequently elaborated via other media, for example in artist's books, drawings and sketches.
Michael Smith's collaborators have included Joshua White, Eric Fischl, Mike Kelley, Seth Price and Mayo Thompson. He cites Buster Keaton, Vito Acconci, Richard Foreman, Samuel Beckett and William Wegman as influential in his exploration of humour and form. This range of conceptual and visual sources is evident in the depth and variety of Smith's simultaneously ironic, hilarious, poignant and poetic body of work. 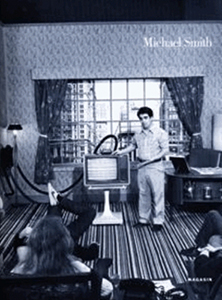 untitled
2000
bilingual edition (English / French)
Le Magasin
19.00 12.00 €
Catalogue dedicated to the works of American video artist and performer Michael Smith. It features a text by Yves Aupetitallot, an interview by John Miller and a full chronology of Smith's works.