Luigi Comencini (1916-2007) was one of the leading post-war Italian film directors. After a neorealist debut, he moved on to direct almost all kinds of movie genre. His many memorable works include Bread, Love and Dreams (1953), Everybody Go Home (1960) and The Scientific Cardplayer (1972). He also directed various highly successful television series: I bambini e noi (1970), Le avventure di Pinocchio (1972) and L'amore in Italia (1978). In his youth, spent in Milan, he was among the founders of the Cineteca Italiana, the very first film archive in Italy. 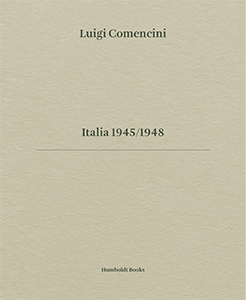 Italia 1945-1948
2016
bilingual edition (English / Italian)
Humboldt Books - Time Travel
50 black & white photographs of post-war Italy taken by director Luigi Comencini shortly before his debut behind the camera. With a series of writings establishing connections between his work as a photographer and his cinematographic oeuvre.