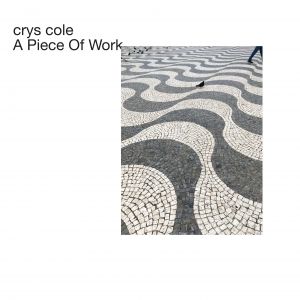 order
wishlist
A radio-commissioned album by the Canadian sound artist, based on sound fragments recorded around the world: a subtle and poetic assemblage of concrete sounds and atmospheres that evolve at the boundaries of perception (with Oren Ambarchi and Seiji Morimoto on drums and electronics).
Sound can be a labyrinth, a twilight drift. Sound can truely unfold when it escapes logic or categorisation. For it is never really one thing or another, especially abstract, collaged or found sound, as it is always connected to a time and a place, or sometimes to an intention, or a notion, or – even more vague – to something as dubious as a feeling. So all this is inevitably inherent in a sound too. Sound is a fact but also an inbetween. In A Piece Of Work, concrete composer crys cole takes us on a journey through those inbetween places. Fragments collected over time in Oslo, Berlin, Vienna, Winnipeg, Melbourne and Lisbon were later arranged and assembled into an invented space, a story arc, a freeform poem. cole's work is one of dynamics and proximity, of complexity and sensitivity. One that embraces both montage and movement. Originally commissioned by Radiophrenia (Glasgow, Scotland), where it premiered in 2019, A Piece Of Work has been developed through live performances and studio sessions, naturally progressing over time and eventually leading to this final version presented here on vinyl.
Composed, performed and recorded by Crys Cole, 2019-21. With additional percussion by Oren Ambarchi and electronics by Seiji Morimoto. Mixed with Joe Talia at Good Mixture in Berlin, 2021. Mastered and cut by Anne Taegert at Dubplates & Mastering in Berlin, 2021. A Piece Of Work was commissioned by Radiophrenia in Glasgow, Scotland, and originally premiered in 2019.
Crys Cole (born 1976) is a Canadian sound artist working in composition, performance and sound installation. Generating subtle and imperfect sounds through haptic gestures and seemingly mundane materials, she creates texturally nuanced works that continuously retune the ear. Cole has performed in Canada, Japan, Australia, Thailand, Singapore, the USA, UK and throughout Europe. She has ongoing collaborations with Oren Ambarchi and with James Rushford (under the name Ora Clementi). She has also worked with Francis Plagne, Leif Elggren, Tetuzi Akiyama, Seiji Morimoto, Jessika Kenney, David Rosenboom, Annea Lockwood, Keith Rowe, Lance Austin Olsen, Jamie Drouin, Mathieu Ruhlmann, David Behrman, Tim Olive and many more. Cole's work has been published on labels Black Truffle, Penultimate Press, Ultra Eczema, caduc, Bocian, Another Timbre and Infrequency editions. With guest appearances published on Touch and MeGO. She has exhibited her work in Canada, Russia, Czech Republic, Germany, Denmark, Sweden, the UK and Thailand.
order wishlist
published in March 2022
21.00 €
in stock 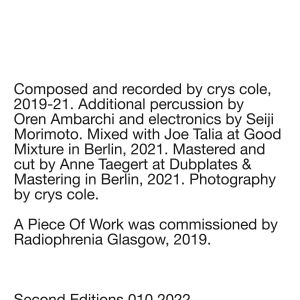