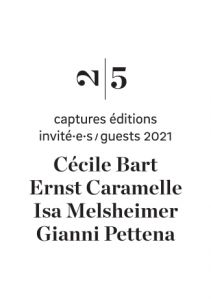 order
wishlist
Four artist's posters.
Cécile Bart chose the A5 notebook and movement. From page to page, colour intersects and overlaps—that of her painted fabrics—and images corresponding to a series of photographs of the Les Pélicans sculpture (1906) by Bugatti-Rembrandt, taken by the artist at the Petit Palais (Paris) in 2018.

Gianni Pettena reinterprets his work Tumbleweeds Catcher, a performance conducted with students from the University of Utah where Pettena was visiting professor in 1971 and 1972. Pettena erects a wooden tower in downtown Salt Lake City to capture tumbleweeds, dry bushes moved along by the wind in the Great American West. On the front cover, Pettena's text reveals his performance, an ode to nature, which would take its revenge on a space controlled by man.

As part of her investigations of concrete architecture, Isa Melsheimer invested in a place located in Märkische Viertel, a former social housing district of Berlin (1960's-70's). For the recto, an entire mise en scène was conceived for a photographic shot of her own character in front of artist Erich Reischke's sculpture (currently in the process of revegetation) for which she designed clothes and a mask. A gouache of the object alone is slipped around and onto the verso.

The use of the same motif—the face, the house and the zigzag employed on different scales, in relation to architecture and for works on paper—is a constant in Ernst Caramelle's work. The zigzag motif appeared early, in exhibitions at the Buades Gallery in Madrid and at Nächst St. Stephan in Vienna. The zigzag was central to the series "sun-pieces", a work that plays on duality and positive and negative shapes, comprising the cutting of masses of tinted papers whose physical substance has been impacted by the effects of the sun. Zigzag Expansion made for edition 2/5, is one variation of this principle.
The 2/5 series falls into the artist's publications category published by Captures. Four guests per year work within the same space of an open A2 format sheet (420 x 594mm), giving rise to various proposals depending on how the sheet is folded. The four titles are distributed together in an envelope at the end of each year.
Since the late 1980s, Cécile Bart (born 1958 in Dijon, France) has induced viewers to experience seeing as an integral part of the world instead of detached from it. Her paintings are sometimes décor, sometimes moving bodies, and also part of an exhibition of the scenes created by the paintings themselves, to which are added the presence of the visitors. Indeed, Cécile Bart's paintings are sensitive tools for exploring the reality of a place and everything that gives life to it. Her painting/screen remains translucent; light passes through it and it can be seen through. It is almost impossible to look at the color alone. Everything which enters into the frame is projected onto it.
Architect, artist and critic, professor of the History of Contemporary Architecture at the University of Florence and of Planning at California State University, Gianni Pettena (born 1940 in Bolzano) belongs to the original group—along with Archizoom, Superstudio and UFO—of radical Italian architecture. Without denying his background in architecture, he was convinced of the need to rethink the meaning of the discipline, just like the other “radicals”, using the languages of “spatial” research of Conceptual Art and American Land Art, instead of the traditional languages of architectural planning. This tendency emerges from the publication L'anarchitetto and from the performance-declaration Io sono la spia. As a critic and architectural historian, he readdressed the themes of “radicalism” in the exhibition “Radicals. Architettura e Design 1960-1975” at the Venice Biennale of Architecture in 1996 and in the exhibitions “Archipelago” (1999) and “Radical Design” (2004). He has also written on funk architecture, on radicalism, on “spatial” artistic research, as well as design and architecture.
Isa Melsheimer (born 1968 in Neuss, Germany) questions modern architecture as much as our natural environment. She usually operates in situ. Her work straddles painting, embroidery and sculpture, and includes plants. Her work questions the complex, evolving relationship of humans with their environment. Architecture plays a central role in the work of Isa Melsheimer, more particularly the shapes and figureheads of modernism, notably Ludwig Mies van der Rohe or Le Corbusier.
Ernst Caramelle (born 1952 in Hall in Tyrol, Austria) studied at the Universität für angewandte Kunst (University of Applied Arts) Vienna. In 1974, he was a research fellow at the Massachusetts Institute of Technology, Boston. He was a guest professor at the Städelschule in Frankfurt am Main 1981–1983, followed by the University of Applied Arts Vienna 1986–1990. In 1994 he became a professor at the Staatliche Akademie der Bildendenden Künste (Academy of Fine Arts) in Karlsruhe, where he has been rector from 2012 to 2018. Ernst Caramelle participated in the Biennale of Sydney in 1990 and the Documenta IX in Kassel in 1992.
What is reality, how can we believe what we see, and what are the conditions of art have been recurring questions in Ernst Caramelle's work since he first began exhibiting in the mid-seventies. "Art is a fake" has been his creed ever since. In his conceptually based oeuvre that spans many different media—from drawing, painting, photography, video, and wall painting, to virtually immaterial works with sunlight on paper—he explores the status of original and fake, production and reproduction, the perception of art and the context of art reception.
order wishlist
Graphic design: Jocelyne Fracheboud.
published in March 2022
4 folded posters (format A6 / A4) in an craft envelope
45.00 €
ISBN : 978-2-491549-17-6
EAN : 9782491549176
in stock 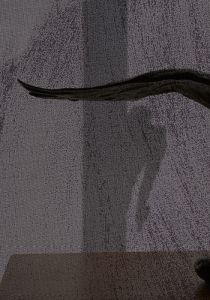 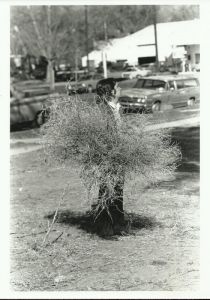 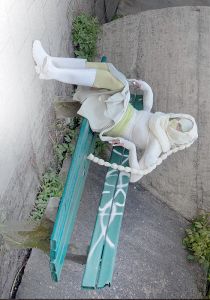 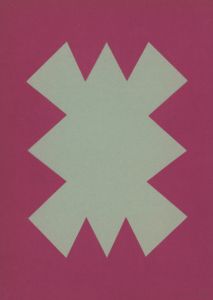