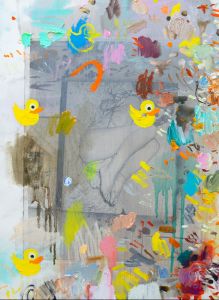 order
wishlist
The female nude by Ida Tursic & Wilfried Mille (signed serigraph printed at 250 copies).
Tursic & Mille, who also called themselves Ida and Wilfried, are among the mythical couples of art history, like Sonia and Robert Delaunay, Frida Kahlo and Diego Rivera, Dalí and Gala, or closer to us, Christo and Jeanne-Claude and Gilbert and George.
And if we had to make a comparison, we could think of Niki de Saint Phalle and Jean Tinguely. Not because of the subjects they deal with, but because of their simple and bold proposals, because of the clash of colours, where one feels a total freedom. No taboos.
For their contribution to the "Naked" series, since they are a couple, Tursic & Mille have made two prints.
There is the male nude and the female nude. There are the three ducks and the single duck—who did what? In this brilliant four-hander, we'll never know.
Pigment print on Hahnemühle Museum Etching 350g, numbered, dated and signed.

The Naked series gathers prints depicting nudes. Each artist offers his personal interpretation of the subject. Each copy is signed and numbered by the artist.
Ida Tursic and Wilfried Mille (born 1974 respectively in Belgrade and Boulogne-sur-mer, live and works in Dijon) began their artistic collaboration in the early 2000s. In their works, they question the possible reproduction of reality on canvas, the production of fantasy and the circulation of images borrowed from the media, websites, still lifes and landscapes.
order wishlist
published in June 2021
27 x 38 cm
250.00 €
in stock