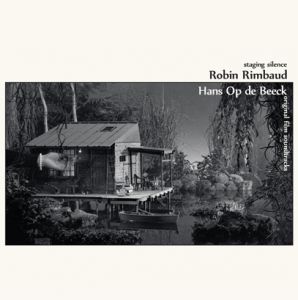 order
wishlist
An exquisite study in dreamlike abstract ambience, a kaleidoscope of sounds and tones that engage the head and the heart.
Rimbaud first met Belgian artist Hans Op de Beeck at Le Fresnoy Studio national des Arts Contemporains when they were both Visiting Professors in 2012.
The artists found an immediate creative connection, and a year after meeting Staging Silence (2) was completed. In 2019, they returned to the theme and created Staging Silence (3).
Each of the films is realised through the same principles, as two pairs of anonymous hands construct and deconstruct fictional interiors and landscapes on a mini film set of just three-square metres in size. The films take the viewer on a visual journey through depopulated, enigmatic and often melancholic, but nonetheless playful, small-scaled places, which are built up and taken down before the eye of the camera.
Ranging from hyper-realistic fictional land and cityscapes to absurd, almost surreal, dreamscapes, the various locations are connected by the sense of mystery and melancholy that pervades them. And at every moment Rimbaud's score is amplifying and illustrating these moments, from tragedy to nostalgia, witty to optimistic.
Introspective and lyrical, Staging Silence offers us a world of mystery and intrigue, held together by nature and time. This is a very humane works experienced at a time when many of us feel disconnected from the world around us. The peculiar silence that permeates this hauntingly beautiful work is very much an illustration of our times, anticipating a future in the past.
Staging Silence is an exquisite study in dreamlike abstract ambience, a kaleidoscope of sounds and tones that engage the head and the heart.
British artist Robin Rimbaud aka Scanner (born 1964 in Southfields, London) traverses the experimental terrain between sound, space, image and form, creating absorbing, multi-layered sound pieces that twist technology in unconventional ways. From his early controversial work using found mobile phone conversations, through to his focus on trawling the hidden noise of the modern metropolis as the symbol of the place where hidden meanings and missed contacts emerge, his restless explorations have won him international admiration from amongst others, Bjork, Aphex Twin and Stockhausen.
Since 1991 he has been intensely active in sonic art, producing concerts, installations and recordings, the albums Mass Observation (1994), Delivery (1997), and The Garden is Full of Metal (1998) hailed by critics as innovative and inspirational works of contemporary electronic music.
Committed to working with cutting edge practitioners he has collaborated with Bryan Ferry, Wayne McGregor, Mike Kelley, Carsten Nicolai, Michael Nyman, Steve McQueen, Laurie Anderson and Hussein Chalayan, amongst many others.
His work connects the points between a bewilderingly diverse array of genres—a partial list would include sound design, film scores, computer music, digital avant garde, contemporary composition, large-scale multimedia performances, product design, architecture, fashion design, rock music and jazz.
Hans Op de Beeck (born 1969 in Turnhout, Belgium, lives and works in Brussels) produces large installations, sculptures, films, drawings, paintings, photographs and texts. His work is a reflection on our complex society and the universal questions of meaning and mortality that resonate within it. He regards man as a being who stages the world around him in a tragi-comic way. Above all, Op de Beeck is keen to stimulate the viewers' senses, and invite them to really experience the image. He seeks to create a form of visual fiction that delivers a moment of wonder, silence and introspection.
order wishlist
published in February 2021
21.00 €
EAN : 5411867335085
in stock
table of contents