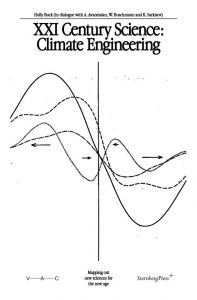 pre-order
wishlist
An inventory of the controversies surrounding the issue of geoengineering.
Geoengineering refers to the large-scale intervention into the earth's natural systems—oceans, soils, and atmosphere—in an attempt to counter the adverse effects of climate change, be it through solar radiation management, carbon dioxide removal, and so forth. Some critics consider this approach problematic because it is oriented toward technological solutions for global heating without reconsidering dominant economic and political structures; mitigation and restoration are being understood merely in terms of innovative fixes like injecting aerosols into the stratosphere. Advocates of geoengineering, however, argue that there is a way to build “a good Anthropocene,” one that would allow for a socially and ecologically desirable future. Interestingly enough, in this case human action fulfills the role of Plato's proverbial pharmakon—both the poison and the cure.
pre-order wishlist
Edited by Holly Buck.
Contributions by Kate Dooley, Sabine Fuss, Peter Irvine, Sivan Kartha, William Welch Kellogg, Bruno Latour, Timothy Lenton, James Meadowcroft, Steven Henry Schneider, Naomi Vaughan.
2021 (publication expected by 4th quarter)
English edition
14,8 x 22.5 cm (softcover)
156 pages (6 b/w ill.)
16.00 €
ISBN : 978-3-95679-540-4
EAN : 9783956795404
forthcoming