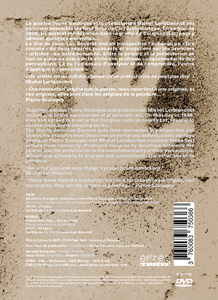 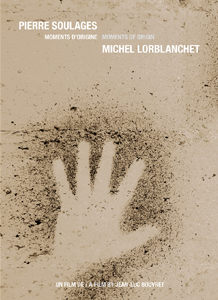 order
wishlist
A conversation between painter Pierre Soulages and prehistorian Michel Lorblanchet about parietal art and the origins of art.
Together, Pierre Soulages and Michel Lorblanchet visited one of the sanctuaries of prehistoric art. On that day in 1996, they had agreed to meet in the Cougnac cave (in county Lot, France) to contemplate some amazing works… The film by Jean-Luc Bouvret puts their discussion in perspective and shares the crossfire from these two powerful and individualistic vantage points as Pierre Soulages and Michel Lorblanchet consider these first artists from humanity. Profound reciprocity develops between the painter and the prehistorian in the complementarity of their perceptions. Where one attempts to analyze and understand, the other seeks to perceive.

“These times from the beginning that I look for take us to our origins, and our origins, they are the origins of painting…”
Pierre Soulages
Jean-Luc Bouvret is a French documentarian.
Pierre Soulages (born 1919 in Rodez, France) has gained international recognition as a prominent figure of both art informel, which arose in France during World War II, and abstract expressionism, its American counterpart. From the 1940s to the 1970s, black progressively conquered the surface of Soulages's calligraphic abstract paintings, which also incorporated subtle hints of color (mainly ocher and blue). His aesthetics radically shifted toward monochrome in 1979, when he initiated his lifelong series Outrenoir. He has been known as "the painter of black and light" ever since. Literally translating as "beyond black," Outrenoir opens onto a new realm that transcends purely gestural and monochromatic abstraction. Systematically applied in thick layers on canvas, black paint is meticulously scraped, striated, and overall sculpted to create smooth or rough areas that reflect light in various ways. By masterfully turning black into a luminous color, Soulages powerfully evokes the genesis of the world, which came out of darkness.
Michel Lorblanchet (born 1937 in Saint-Denis-Pré-Martel, France) is a world-renowned specialist in prehistoric art.
order wishlist
Edited by Gilles Coudert.
Film and bonus by Jean-Luc Bouvret.
published in September 2019
film in French version with English subtitles
DVD Digipack DVD5 – PAL – MULTIZONE – AC3 Stereo – 16/9 & 4/3
27' + 14' (bonus)
20.00 €
ISBN : 3760083750366
EAN : 3760083750366
in stock
view video sample
https://vimeo.com/349630344