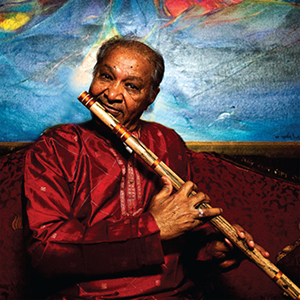 order
Solo album of the world legend bansuri master from India. The acclaimed flautist recorded it in a 16th century Church in the Netherlands. The record gathers musical improvisations on bansuri with tanpura and flute as accompanying instruments. Ajanma takes the listener into an intimate and meditative communication with Chaurasia.
Hariprasad Chaurasia is an Indian virtuoso flautist in the Hindustani tradition, born 1 July 1938 in Allahabad, Uttar Pradesh, India. Ajanma takes a unique place in the discography of the North Indian flute legend. The recording was captured in a small 16th century Church in Rhoon, Netherlands in June 2014, which is well known for the character and quality of it's acoustics. This double CD is comprised of two solo improvisations accompanied by a tanpura and a short piece of flute without the usual tanpura drone.
The deliberate omission of a percussion accompaniment allows Pandit Hariprasad Chaurasia to take his flute on an intimate journey, carrying the listener through the honesty, density of colour and lyrical architecture of the world of sound. Hariprasad Chaurasia's patience and the purity of his musical mind enable him to use his flute to illuminate the landscapes of the listener's imagination, making this recording a truly profound, intimate and meditative communication with the maestro.
This CD is part of the “Granvat” series, a music collection of improvised music, world music, ambient, folk, beats & electronic music, produced by Belgian art platform Granvat curated by the brothers Stijn & Bert Cools (Book of Air).
An internationally acclaimed flautist of India, Pandit Hariprasad Chaurasia (born 1938 in Allahabad, Uttar Pradesh, India) is a very popular and eminent artiste par excellence who is known for his outstanding contribution in popularizing Indian Traditionnal Music all over the world. His consummate artistry has distinguished him as the greatest living master of the North Indian Bamboo Flute, acclaimed both at home and abroad.
order
published in November 2018
2 CD digisleeve
3 tracks (46'49 / 39'06 / 4'17)
17.50 €
in stock 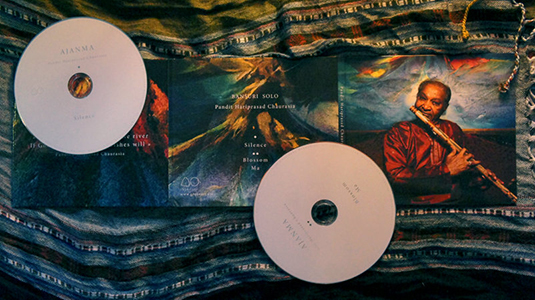