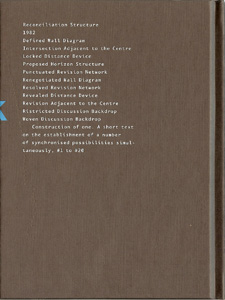 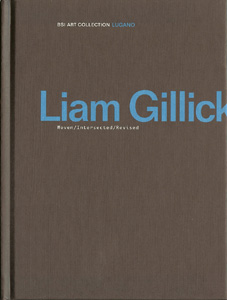 wishlist
This small monograph shows the realization of Liam Gillick's designs in conference rooms, corridors, and offices of a bank, coinciding with his sustained interest in the negotiation of a middle ground between corporate culture and contemporary art. The volume is accompanied by an artist's essay discussing the dissolution of the public/private dichotomy into a grey zone of semi-public/semi-private spheres.
The book is published by the commissioner, BSI (Banca della Svizzera Italiana), as part of their Art Program, relaunched in 2005 by the Italian curator and critic Luca Cerizza. Stemming from a program of site-specific commissions for the bank, the books in this series are conceived as individual monographs on each artist's contribution. Gathering preparatory material, documentation on the works, and essays by critics or the artists themselves, these volumes contribute to the discussion around commissioning, the notions of public vs. private collection, and the relationship between artists and patrons.

Other titles in the series: John Armleder, Robert Barry, Daniel Buren, Tony Cragg, Daniel Roth.
After having studied at Goldsmiths College in London, Liam Gillick appeared on the English scene at the beginning of the 1990s, right in the middle of the YBA phenomenon. He has been noticed for his post-Conceptual practice, and his critical and curatorial engagement.
Winner in 1998 of the Paul Cassirer Kunstpreis in Berlin, and nominated in 2002 for the Turner Prize, his work has been widely presented in large exhibitions over the last ten years (Documenta, Venice Biennale, Manifesta, etc.). Respected for the rigor of the thinking developed in his work and writings, Liam Gillick's sculptures, installations, and textual pieces are also informed by a sharp visual sense of structural and formal material properties of the vocabulary he uses.
wishlist
Text by Liam Gillick.
published in 2005
bilingual edition (English / Italian)
14 x 18,5 cm (hardcover)
74 pages (colour illustrations)
ISBN : 978-3-905701-47-0
EAN : 9783905701470
sold out 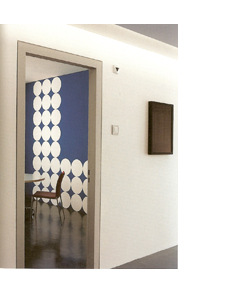 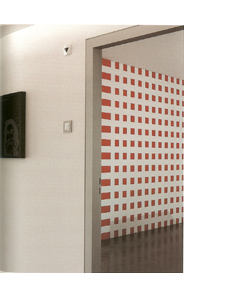