Spike #57 – There is no such thing as society 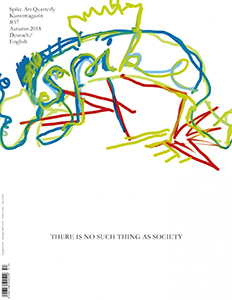 order
wishlist
Special 1980's Issue: artist/activist collective Gran Fury; Liam Gillick; Philippe Thomas; London “style bible” magazines The Face and i-D; Bob Nickas; interview with Pippa Garner; the music criticism of American Spycho's Patrick Bateman; Rosemarie Trockel; 80s Vienna art scene; Mathieu Copeland on post-modernism; Helene Winer; Ericka Beckman; Jean Baudrillard: the signature thinker of the 80s…
“There is no such thing as society,” Margaret Thatcher said in 1987. The dismantling of the welfare state, careerism, selfishness and lobby renovations. A rabid free-for-all for those with something; a big betrayal for those who would be left with nothing. It ushered in the political predicament we are still mired in today. But there was also a growing sense of community. In England workers took to the streets, in New York there were protests against the cynicism of the government's response to the AIDS crisis. And for part of the art world, political collective engagement was more important than the market. This issue is about the 80s.
This issue is about the last great era of low self-esteem, about protest and survive, about 80s New York, London and Vienna, and a universe with no fixed beginning and more ends for ever night. With Liam Gillick, Bob Nickas, Gran Fury, Pippa Garner, Philippe Thomas, Sarah Morris & Thaddaeus Ropac, Peter Pakesch, Tariq Goddard, Natasha Stagg, Mathieu Copeland, Helene Winer, Ella Plevin and many more.
Founded by the artist Rita Vitorelli in 2004, Spike (Spike Art Quarterly) is a quarterly magazine on contemporary art published in English which aims at sustaining a vigorous, independent, and meaningful art criticism. At the heart of each issue are feature essays by leading critics and curators on artists making work that plays a significant role in current debates. Situated between art theory and practice and ranging far beyond its editorial base in Vienna and Berlin, Spike is both rigorously academic and stylishly essayistic. Spike's renowned pool of contributing writers, artists, collectors and gallerists observe and reflect on contemporary art and analyse international developments in contemporary culture, offering its readers both intimacy and immediacy through an unusually open editorial approach that is not afraid of controversy and provocation.
order wishlist
published in October 2018
bilingual edition (English / German)
21,7 x 28 cm (softcover)
210 pages (color ill.)
9.50 €
in stock
table of contents