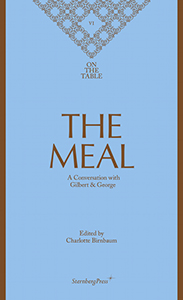 order
wishlist
Charlotte Birnbaum meets with Gilbert & George to discuss The Meal—a culinary performance organized in 1969 by the British duo, with David Hockney as the guest of honor. Also included here are photos and memorabilia from the singular event (the sixth publication in the On the Table series, that explore the encounter between food and art).
Gilbert & George never cook and always eat out. Back in 1969, however, the artist duo hosted The Meal, an elaborate dinner party that included thirteen guests, Princess Margaret's butler, a chef who prepared a meal from a Victorian cookery manual, and the guest of honor, artist David Hockney. While the art world of the time was largely characterized by Pop art, Minimalism, and Conceptual art, Gilbert & George developed an entirely unique philosophy and combined their daily lives with their artistic vision; in short, their art and life are one! Charlotte Birnbaum took a trip to London's East End to visit the immaculately dressed pair to discuss The Meal and other curious projects from their fifty-year collaboration. Also included here are photos and memorabilia from the singular event.
Charlotte Birnbaum is a writer and a culinary historian based in Stockholm and Frankfurt am Main. Since 2011, she has curated “This Dinner Is a Group Show,” an ongoing series of events involving artists and chefs who engage the legacy and future of extravagant meals. Her other books include Paulas Juwelen: Kulinarische Streifzüge durch das Jahr (Walther König, 2013) and The Journey Within: Cooking with Offal (Walther König, 2010).
Gilbert & George are Gilbert Prousch (born in South Tyrol, Italy, 1943) and George Passmore (born in England, 1942). They live and work in London. For the last 40 years the artistes have spanned the international art scene with as much insolence as elegance. Real living sculptures, they have developed a repetitive language around recurrent figures and themes: shit, piss, blood tears, nudity, sperm, alcohol, drugs. Theirs is an oeuvre that has radically overturned conventions and thinking of the period, and which refers literally to homosexuality, exclusion, social and religious violence.
order wishlist
Edited by Charlotte Birnbaum.