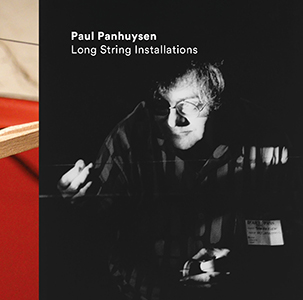 order
wishlist
3 vinyl LP edition presenting solely unreleased recordings of Panhuysen's famous long string installations. It documents the period 1982-2012, and includes a posthumous track from 2017. With liner notes by Rolf Sachsse and Stephan Wunderlich, and richly illustrated inner sleeves.
After two LPs in 2014 and 2017, Edition Telemark now turns to the group of works that is probably the most well-known within the vast oeuvre of Dutch sound and visual artist Paul Panhuysen (1934-2015): his long string installations. Using this term, he referred to all of his works involving strings and sounds. They were realized all around the world between 1982 and 2012—until 1991 mostly together with Johan Goedhart—, each installation made specifically for the site where it was displayed.
Unlike other artists working with long strings around the same time, e.g. Ellen Fullman and Terry Fox, Panhuysen's strings were instruments or performative material only secondarily. Rather, his installations can be considered sculptural and sounding events in space, operating in between two lines of tradition, constructivism and situationism, that are evident also in many other parts of his oeuvre.

“Over 250 long string installations were made since 1982 and have produced a better understanding of what is happening in these works. The first information about what happens around us always depends on the perception and detection of our senses and is afterwards transformed, analyzed and interpreted by the brain. It has been a happy coincidence which has drawn my attention to this opportunity to integrate image and sound in the art of long string installations. […] In daily life we try to understand what is happening primarily by visual and auditory perception. In art these two senses are mostly kept apart. In the long string installations, eyes and ears are equally important. This improves the understanding of reality and daily life.” (from Panhuysen's preface to the book Long Strings 1982–2011)

The first recordings of Panhuysen's long string installations were published in the 1980s, most famously on a 3-LP box set edited on Apollo Records in 1986. This new 3-LP set includes solely unreleased recordings made between 1982 and 2012, with one recording added posthumously in 2017. It is presented in a triple gate-fold sleeve with printed inner sleeves containing liner notes by Rolf Sachsse and Stephan Wunderlich as well as various high-resolution photos.
Limited edition of 250 copies.
Artist, musician, performer, organizer, Paul Panhuysen (1934, Borgharen – 2015), after having studied painting and monumental design at the Jan van Eyck Academy in Maastricht, and art sociology at the University of Utrecht, was, successively, the director of the Fine Arts Academy in Leeuwarden, and a curator and head of education and public relations for the Den Haag City Museum and for the Van Abbe Museum in Eindhoven. In addition, he continued to paint and make collages.
In 1965 he founded the artist group “De Bende van de Blauwe Hand.” This group, which was closely related to Fluxus, presented exhibitions, environments and happenings in museums and galleries. Starting in 1965, he presented “situations” meant to involve the audience, and in 1968, he started the Maciunas Quartet, who are still making experimental music as the Maciunas Ensemble. In the early seventies, Panhuysen worked as an advisory artist with urban development teams (o.a. in Zoetermeer, Lunetten, Maaspoort) and developed systematic ordering systems and mathematical series that he has continued to use in his work as an artist. In addition, Panhuysen's work shows a predilection for found objects and the element of chance. To an increasing degree, Panhuysen has been concentrating on sound art, which has come to occupy an important place in his visual art work. He has presented his Long String Installations, which are played in concerts personally and in exhibitions as automats,worldwide in festivals since 1982 . These installations are set-up in indoor or outdoor spaces for anywhere from 1 to 40 days, using specific properties and architectural prospects of the location.
Since 1989 Panhuysen developped artworks in which he confronts the audience with the creativity, intelligence and communicational skills of animals, especially of birds.
In 1980, Panhuysen founded Het Apollohuis, and since then till 1997, he has been the director of this internationally oriented podium where artists from divergent disciplines did present their work. In 1996 he received the Cultural Award of Noord-Brabant and in1998 he became Companion of the Order of the Dutch Lion. In 2004 Panhuysen received in the category Digital Musics from PrixArs Electronica an Honory Mention for the composition A Magic Square of 5 to Look at / A Magic Square of 5 to Listen to. 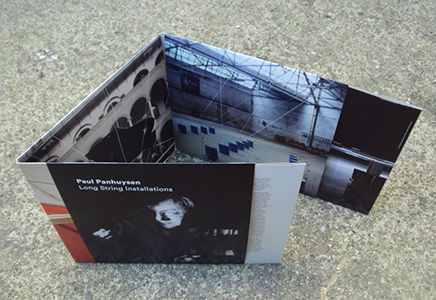