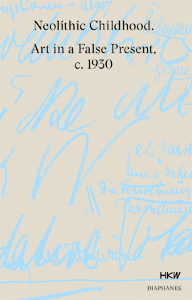 order
wishlist
Based on the writings of Carl Einstein, this comprehensive, richly illustrated reader examines how the artistic avant-gardes reacted to the multiple crises of European modernity around 1930. Structured around a glossary, the publication gathers commissioned essays, texts by Einstein, and documentation on the namesake exhibition.
Neolithic Childhood examines how in the interwar years the artistic avant-gardes in Europe and beyond reacted to the “crisis” of almost everything, from the barbarism of technological mass war to the hypocrisies of colonial discourse. The perceived need to re-establish European civilization after the disaster of the First World War led to an interminable reconstruction of origins and beginnings—making “ground zero” the limiting function of modernity. Based on the writings of the anti-academic art historian Carl Einstein (1885–1940), the exhibition is devoted to despair over the present and the pressing interest in “altering” humanity, as manifested from the 1920s to the 1940s in the artistic avant-gardes and the sciences.
As a fundamental part of the exhibition project, a reader, also titled Neolithic Childhood, will provide in-depth discussions of specific aspects raised by the exhibition. Inspired by the Critical Dictionary of Documents (1929/1930), the magazine directed by Georges Bataille and co-founded by Carl Einstein, the publication will be structured around a comprehensive “glossary”. This will be comprised of newly commissioned texts treating about twenty-five terms drawn from the vocabulary of Carl Einstein and his contemporaries, including “Autonomy”, “Ethnographic Surrealism”, “Formalism”, “Hallucination”, “Handbook”, “Metamorphosis”, “Mythology”, “Primitive”.
In addition to the glossary, the publication will include newly commissioned essays formulating the theoretical and historical grounding of the project. A small selection of primary texts by Carl Einstein will include a first ever English translation of his unpublished notes for a Handbook of Art (mid-1930s). Beyond this, the publication will document the exhibition by way of a complete list of exhibits as well as a selection of descriptive texts and images presenting specific exhibits.
Works by Jean (Hans) Arp, Willi Baumeister, Georges Braque, Brassaï, Claude Cahun, Lux T. Feininger, Max Ernst, Florence Henri, Barbara Hepworth, Hannah Höch, Heinrich Hoerle, Paul Klee, Germaine Krull, Helen Levitt, André Masson, Alexandra Povòrina, Gaston-Louis Roux, Kalifala Sidibé, Louis Soutter, Yves Tanguy, Toyen, Jindřich Štyrský, Raoul Ubac, Paule Vézelay…