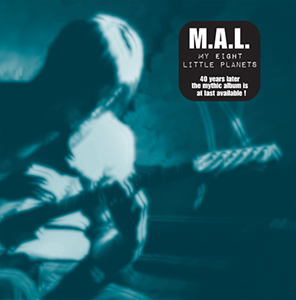 First-time release of the tapes that are said to have inspired Manuel Göttsching's classic, Inventions for Electric Guitar. Recorded between 1972 and 1976, these revolutionary tracks by M.A.L. aka Daniel Malempré were made using only an electric guitar Fender Stratocaster 1964, a Wah-Wah pedal, and a reel to reel recorder.
Lies of omission and appropriations. The story of a magnetic tape that contained a trade secret.
Four decades after its release (on Orh, 1975), Inventions for Electric Guitar, the solo debut by Ash Ra Temple guitarist Manuel Göttsching, is now a classic, an undisputed worldwide reference. This album was made using only an electric guitar and a simple 4-track tape recorder.
So was the challenge, and so was its impact. Göttsching recorded it in July-August 1974 in Berlin, after a sudden technical revelation. The original LP sleeve had the following printed on its back: Manuel Göttsching (guitars only). Manuel played his guitar and used a 4 track TEAC A3340, Revox A77 for echoes, WahWah pedal, volume pedal, Sola Sound Fuzz, Schaller Rotosound and Hawaiian steel bar.
The reaction was unanimous: this was a significant innovation, in terms of both technique and creativity. However, there are little-known facts to this case. In early 1974, Göttsching's label received a tape sent by M.A.L.—same design, same configuration, almost the same tracks. This is known by only a handful of experimental musicians from the Charleroi area. M.A.L. aka Daniel Malempré is the actual inventor of this technique, which Göttsching reproduced a few months later. Given the above, I suggest that we listen to both albums. As doubts are removed, the truth sets in, forty years later. Here's hoping that this will ease the deep disgust that made M.A.L. leave his guitar untouched for so long.
All music by M.A.L. Fender Stratocaster 1964, pedal Wah-Wah Cry Baby. Recorded and mixed at home between 1972 and 1976 on a reel to reel recorder Sony TC-630.
Also available on vinyl.
M.A.L. is a project by Belgian experimental musician Daniel Malempré, also a member of the bands Human Flesh and Kosmose.
published in May 2018
6-panel CD digipack
16 tracks (8'54 / 2'56 / 3'02 / 7'14 / 9'40 / 6'35 / 2'09 / 3'46 / 3'10 / 1'21 / 3'37 / 2'35 / 3'24 / 1'27 / 15'12 / 1'08)
15.00 €
currently out of stock