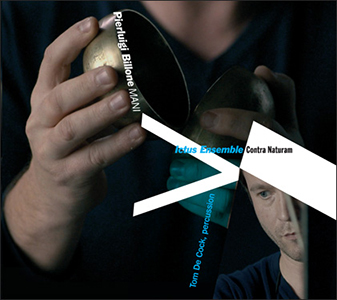 order
This the very first LP of the new collection “Contra Naturam”, a collaboration between Brussels-based contemporary music ensemble Ictus Ensemble and music label Sub Rosa. This audio recording presents a percussion-based composition by Pierluigi Billone, performed by Tom De Cock. Booklet features an unpublished essay by Laurent Feneyrou (in English, Dutch, French).
This double CD is accompanied by a 20 minutes long video by Joachim Thôme, published on Vimeo, meticulously displaying the special “touch” that is so typical for Pierluigi Billone's music: the musicians body as part of the sound-production-process—as described by Laurent Feneyrou in the CD's program notes : “The contact between hand and instrument is an immediate kind of knowledge, an esthetics of sensation. In touching things, we touch ourselves. The contact of one with an instrument is a contact of one with oneself.”

“Billone shows interest in artisanal craftsmanship, in which the hands are much more organically involved in what they manipulate—wood metal, glass etc.—than is the case with music making. He also speaks of the 'intelligence of the hand' (one can see the equivalent for our lower limbs in the way a child learns to walk). […] In this case, listening is to attune oneself, fully, to rhythms.”
Laurent Feneyrou

The concept of “Contra Naturam”: The “magic of the record” befits contemporary music, which starts by adhering to an open, flexible sonic space where magnetic bolts of lightning shoot through. In that respect, at least, it has always been pop. The record lifts the curtain on a virtual stage; it creates its own space time; it reports on a listening project. And home computing has changed the game: the digital kitchen doesn't intimidate anyone anymore: editing and mixing are now part of the performer's daily routine
Pierluigi Billone (born 1960 in Italy, lives and works in Vienna) is an Italian composer known for works which often “reinvent” the performance techniques of the instruments involved. He studied under Salvatore Sciarrino and Helmut Lachenmann. He focuses on the nature of sound. He also draws on free jazz and non-European music for his research on sound matter. After a brief return to Italy in 2000, he decided to move to Vienna. His music has privileged performers such as the Klangforum Wien. It is broadcast by German and Austrian radio, is regularly scheduled in international festivals such as Donaueschingen.
Tom De Cock (born 1982) received his masters degree in percussion at the Royal Conservatory of Brussels (2005), as well as a masters degree in contemporary music at the HFMDK Frankfurt am Main (2007), Germany. In 2009, he graduated “summa cum laude” at the HFM Detmold in the Konzertexamen degree and obtained his “Doctor of Arts” degree at the VUB and Koninklijk Conservatorium Brussel in 2015. He received the Horlait Dapsens prize in 2007.
Next to his position as percussion soloist at the Brussels Philharmonic orchestra, Tom has been working as a freelance musician in Europe, he played with Ensemble Modern, MusikFabrik, Radio Kamer Philharmonie, among others and is a fixed member of Ictus, Nadar Ensemble, Triatu, and Ensemble XII.
He performed at festivals such as Agora Paris, Internationale Ferienkurse Darmstadt, Donaueschinger Musiktage, Klangspuren Schwaz, Bang on a Can NY, Ars Musica, Huddersfield Contemporary Music Festival, etc. Tom has collaborated with Pierre Boulez, Peter Eötvös, Philippe Hurel, Bruno Mantovani, Philippe Manoury, Georges Aperghis and many other prominent figures of international contemporary music.
At the moment, Tom is working as the assistant percussion teacher at Conservatoire Royal de Liège.
order
Text by Laurent Feneyrou.
published in February 2018
2 CD digipack + 24-page booklet
5 tracks (18'29 / 18'46 / 20'42 / 27'48 / 16'22)
16.50 €
in stock
view video sample
https://vimeo.com/242033526