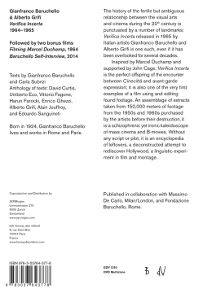 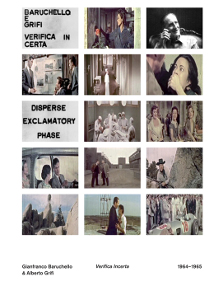 order
wishlist
Avant-garde meets Cinecittà: in 1964, artists Baruchello and Griffi edit found footage of Hollywood films from the fifties in Italian version. This original assemblage seeks to disclose the formatting process in the Cinema Industry and offer a new meaning to images.
The history of the fertile but ambiguous relationship between visual arts and cinema during the 20th century is punctuated by a number of landmarks: Verifica Incerta released in 1964 by Italian artists Gianfranco Baruchello and Alberto Griffi is one such, even if it has been overlooked for several decades. Inspired by Marcel Duchamp and supported by John Cage—the film was premiered in Paris at La Cinémathèque française and in New York at The Museum of Modern Art—Verifica Incerta is the perfect offspring from the encounter between Cinecittà and avant-garde expression; it is also one of the very first examples of a film using found footage. An assemblage of extracts taken from 450,000 feet of footage from the 1950s purchased by the artists before their destruction, it is a schizophrenic yet ironic kaleidoscope about mass cinema and B-movies. Without any script or plot, it is an encyclopedia of leftovers, a deconstructed attempt to rediscover Hollywood, a linguistic experiment in film and montage. As art and cinema critic Carla Subrizi writes: “Verifica Incertaquestions time and movement through images, creating a system that it is not internal to the single shots but rather external: it is the process of selecting, editing, discarding, recomposing that creates a new conception of time. Rhythm, duration, stopping and starting, distance: the images are used as ready-mades and placed in a different order through montage; they abandon their original meaning and gain a different and uncanny one.”
Born in 1924, Gianfranco Baruchello lives and works in Rome, where he created the Agricola Cornelia in 1973. His practice as an artist, poet, videographer and experimental filmmaker is now being rediscovered thanks to a series of exhibitions, and participation in Biennials and group exhibitions, as well as publications.
order wishlist
Edited by Clément Dirié.
Texts by Gianfranco Baruchello and Carla Subrizi.
published in July 2015
original version, subtitles in English and Italian
13,5 x 19 cm
DVD Multizone, PAL/SECAM, 67', 24 pages booklet
25.00 €
ISBN : 978-3-03764-377-8
EAN : 9783037643778
in stock