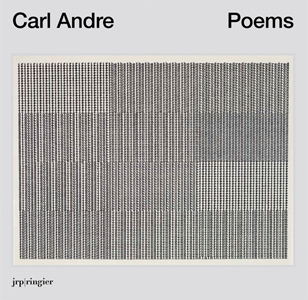 wishlist
Carl Andre's poems (retrospective monograph).
As Gavin Delahunty writes, "Carl Andre has also made an art of words." On the occasion of the Carl Andre exhibition at the Museum zu Allerheiligen in Switzerland, JRP|Ringier is publishing a retrospective monograph which presents the artist's poems. Carl Andre lays words on paper just as he lays pieces of metals or bricks on the floor. Formed by letters piled up in blocks of words assembled together, on top of each other, these poems, which he has written since the 1960s, arise as "sculptural configurations." In the tradition of concrete poetry, words become adjustable entities moved around and placed within the limits of the space of the sheet of paper in order to create new configurations and patterns, and eventually new works of art. "Andre [ … ] understands the word as a concrete module, similar to the squares of industrial metal, wooden timbers, or bricks in his signature three-dimensional pieces," writes Rob Weiner.
The book includes essays by art historians Gavin Delahunty and Valérie Mavridorakis, as well as curator Lynn Kost, and situates Carl Andre's written works within their initial context in the 1960s at a time when Minimalism was being defined.
Published on the occasion of the eponymous exhibition at Museum zu Allerheiligen, Schaffhausen, from May to August 2014.