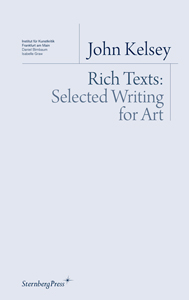 order
wishlist
Compiled for the first time here, the critic, artist, gallerist, dealer, translator John Kelsey's selected essays gamesomely convey some of the most poignant challenges in the art world and in the many social roles it creates.
“When the critic chooses to become a smuggler, a hack, a cook, or an artist,” Kelsey said at a 2007 conference at the Städelschule in Frankfurt am Main, “it's maybe because criticism as such remains tied to an outmoded social relation.” It is precisely this relation that Kelsey intends to not only critique but also to surpass. In this way, Kelsey's “Rich Texts” play the double role of explaining the art world and actively participating in it; they close the distance between the work of art and how we talk about it.

Originally published in Artforum—where Kelsey is a contributing editor—Texte zur Kunst, Parkett, and various artists' catalogues, the essays compiled in Rich Texts have all been written over the last decade, and therefore embody a timeliness that strikes at the core of the contemporary art world and the crises that have come to define it.

“With a keen sense of the way objects and subjects appear in the spaces we share, and how we inhabit our bodies, John Kelsey writes texts at once playful and true to the situations under observation. He does not write from an imaginary critical distance, but as someone fully aware of being immersed in the commercial world, commodified and for hire—i.e., as a ‘hack'—yet constantly searching for new forms of experimentation.” —Daniel Birnbaum and Isabelle Graw
John Kelsey is a founding member of Bernadette Corporation and co-Director of Reena Spaulings Fine Art.
order wishlist
Edited by Daniel Birnbaum and Isabelle Graw.